The concept of theoretical plates and trays or equilibrium stages is used in the design of many different types of separation.

The concept of theoretical plates in designing distillation processes has been discussed in many reference texts.[1][2][3][4][5] Any physical device that provides good contact between the vapor and liquid phases present in industrial-scale distillation columns or laboratory-scale glassware distillation columns constitutes a "plate" or "tray". Since an actual, physical plate is rarely a 100% efficient equilibrium stage, the number of actual plates is more than the required theoretical plates.

So-called bubble-cap or valve-cap trays are examples of the vapor and liquid contact devices used in industrial distillation columns. The trays or plates used in industrial distillation columns are fabricated of circular steel plates and usually installed inside the column at intervals of about 60 to 75 cm (24 to 30 inches) up the height of the column. That spacing is chosen primarily for ease of installation and ease of access for future repair or maintenance. 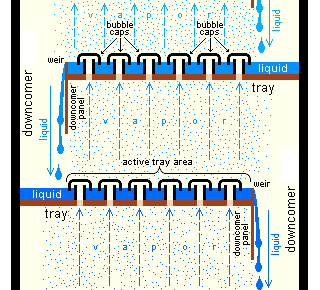 For example, a very simple tray would be a perforated tray. The desired vapor and liquid contacting would occur as the vapor flowing upwards through the perforations would contact the liquid flowing downwards through the perforations. In current modern practice, as shown in the adjacent diagram, better contacting is achieved by installing bubble-caps or valve caps located at each perforation to promote the formation of vapor bubbles flowing through a thin layer of liquid maintained by a weir on each tray.

To design a distillation unit or a similar chemical process, the number of theoretical trays or plates (that is, hypothetical equilibrium stages),

, required in the process should be determined, taking into account a likely range of feedstock composition and the desired degree of separation of the components in the output fractions. In industrial continuous fractionating columns,

is determined by starting at either the top or bottom of the column and calculating material balances, heat balances and equilibrium flash vaporizations for each of the succession of equilibrium stages until the desired end product composition is achieved. The calculation process requires the availability of a great deal of vapor-liquid equilibrium data for the components present in the distillation feed, and the calculation procedure can be very complex.[1][2][4]

is then divided by the tray efficiency,

, to determine the actual number of trays or physical plates,

, needed in the ditillation column. The final design choice of the number of trays to be installed in a distillation column is then selected based upon an economic balance between the cost of additional trays and the cost of using a higher reflux rate.

The material in packed beds can either be random dumped packing (1-3" wide) such as Raschig rings or structured sheet metal. Liquids tend to wet the surface of the packing and the vapors contact the wetted surface, where mass transfer takes place.

The same equation applies in chromatography processes as for the processes, namely:

The concept of theoretical plates or trays applies to other processes as well, such as capillary electrophoresis and some types of adsorption.