Machine guns and similiar technology and its effect on tactics/strategies

I'm not an expert on WWI, but it seems that there should be some mention of the effect machine guns and the like had on casualty tolls more than the bit mentioned in the Trenches subsection. I read and was taught that the high number of casualties was due in part to the use of outdated tactics and strategies from before the widespread use of highly accurate guns with high rates of fire, leading to such disasters as fatal charges across no-man's-land. Perhaps somebody more knowledgeable might be able to expand upon this in the article? Andrew Chong 09:44, 5 August 2007 (CDT)

lotsof confusion re WWI because so many things were happening at once in many different places. Chart helps sort them out. (more legibility would be good idea--needs someone to rescan 2 pages from H.G, Wells Outline of History (1922) Richard Jensen 00:57, 9 September 2007 (CDT)

Right now, the chart is more embarrassing than helpful, because it is literally unreadable. I have removed it until it is rescanned. It can be found at Image:Ww1-summary.jpg --Larry Sanger 20:31, 23 September 2007 (CDT)

Richard, it is contrary to policy to revert without first answering a person's explanation. I should think this is particularly obvious when the person you are reverting is the editor-in-chief. Do not revert me again. --Larry Sanger 20:44, 23 September 2007 (CDT)

I can read every word on the chart and it is a very useful device to keep track of a huge number of events all over the world. If someone wants to make a more legible copy or rescan it from HG Wells, then great. That is very unlikely to happen if it gets removed. Richard Jensen 20:45, 23 September 2007 (CDT)

Text here was removed by the Constabulary on grounds of civility. (The author may replace this template with an edited version of the original remarks.)

This has absolutely nothing to do with knowledge of WWI and you know it. The poor quality of the image rendered it pointless, and even embarrassing, to include. I am a better judge of this than you are, I dare say, precisely because I don't know as much about WWI as you do. You can fill in the gaps and thereby glean more from the image. I can't, and so I assume most readers won't be able to. --Larry Sanger 20:58, 23 September 2007 (CDT)

perhaps is just a problem of poor eyesight--what lines of text are unreadable? I can read them all. Richard Jensen 20:55, 23 September 2007 (CDT)

I have looked at the chart in both IE7 and Firefox and I can read the LARGE letters, some of the middle-sized, and none of the small stuff -- it's just a blur. I have a high-resolution screen, a very high quality graphics cards, and *excellent* computer glasses that make my eyesight about 20-15 when looking at a monitor. So I doubt if the problem lies with Larry. Hayford Peirce 21:07, 23 September 2007 (CDT)

The image is pretty embarrassing, I think. It's so bad upon first glance, the average reader would not bother even trying to read it. I'll scan the image this week and upload one nice and clear. The book is in the library at the college I work at.  —Stephen Ewen (Talk)

it's an empirical question on legibility, which of course is a common problem with maps as well. If we erase an image because ther are a few words some people cannot read then we lose most historic maps as well as this chart. (The HG Wells books was a runaway best seller with million of copies out there. Someone can get a copy, use the photocopier to enlarge it, then scan. This image came from a mediocre Google scan) Richard Jensen 21:10, 23 September 2007 (CDT)

You don't photocopy first, you scan well. But anyway, Richard, are there other graphics from the book you'd like scanned besides this one?  —Stephen Ewen (Talk) 21:28, 23 September 2007 (CDT)

I had best luck by enlarging the image with the xerox machine because it has much better resolution than the scanner. Then I scan at 300dpi, thereby picking up a lot more detail than if i scanned the book directly. The Wells book has many terrific maps and portraits by artist J. F. Horrabin. Richard Jensen 21:47, 23 September 2007 (CDT)

Good scanners have interpolation. That enlarges in a superior way. So do tell me if you want other specific images from the book; otherwise, I'll just go with getting this one.  —Stephen Ewen (Talk) 23:06, 23 September 2007 (CDT)

better do p 369 before somebody decides to erase it too. 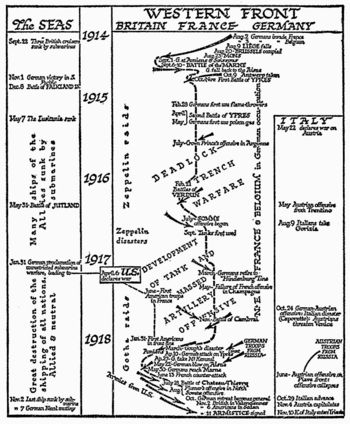 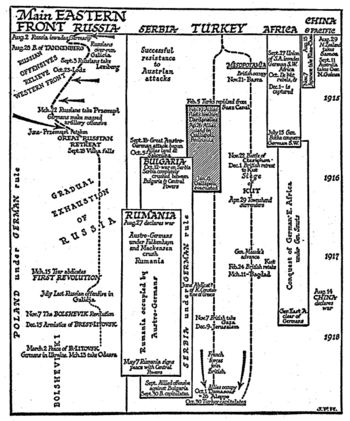 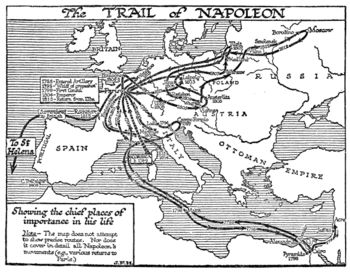 I can see that this is going to get pretty large, if it keeps on going the way it's going. I have suggested on the Forum that we shouldn't have articles which are the length of a small book ... because if someone wanted a book on the subject, they'd go get one!

How about this article just gives an overview (a couple of screens long) of the war, something someone can read in, say, 10 minutes, and then refers to individual pages for more detailed descriptions of major theatres of operations, etc?

As to whether those pages should be sub-pages of this one, or free-standing articles, I have no preconceptions. And again, the content here is good stuff, that's not my issue. J. Noel Chiappa 16:46, 13 March 2008 (CDT)

the article is long because it's an extremely complex and important story involving many countries. The major enyclopedias (like Ency Brit) have long coverage too. We can chop it into into smaller articles, say year-by-year--but I can't see that helps anyone because they will lose track of the big picture. Note that we assume there will be separate articles on major battles (Verdun, Somme, Jutland etc) and weapons (gas, tanks, airplaes, subs, machine guns etc), which are only briefly covered here. As for books, they are long too!Richard Jensen 17:02, 13 March 2008 (CDT)

I'm not expressing myself clearly, I think. Yes, anything that's an overall theme (e.g. stalemate due to ossified tactics not having caught up to new weapons), a key part of the big picture, should indeed be treated here. And yes, I know it will need to be a fairly long article, because it is a complex topic. (Although I shudder to think about World War II!) But at the same time I think we should look at any chunk of material here with the thought 'does that have to be here, or can I spin it out to a separate article', to keep it from growing into a small book. J. Noel Chiappa 16:25, 14 March 2008 (CDT)

I like the idea of having a "further reading" section in the article itself (although we might want to use that 'section hiding' stuff that I experimented with for hiding the footnotes). However, I think that to be useful to the ordinary reader (who will be, we hope, the vast majority of those who come here :-) the entries need to be well annotated (actually, all Biblio entries could use that, but it's especially needed on FR entries), and we might want to winnow it to a half-dozen or so of the very best and most widely available books on the subject, because that's what our 'average reader' would benefit from the most. J. Noel Chiappa 16:25, 14 March 2008 (CDT)

well I tried in the further reading to give about 20 starter books that include summaries and some basic topics of the sort that might be available at university libraries (like Cruttwell) (plus links to Amazon that has excerpts and reviews of new books.) I avoided most light-weight "popular" titles and Osprey books in favor of surveys by the best experts. CZ authors are invited to annotate away! We need about 20 titles (rather than just 4 like Encarta) to give users a reasonable chance of finding them in libraries. Maybe we should drop Stokesbury and add Tuchman? Richard Jensen 17:20, 14 March 2008 (CDT)

Tuchman's a good idea; I haven't looked at it in a long time, so I'll have to go get out my copy, and see what I think. (I'm always partial to the AJP Taylor one, which has the benefit of good illustrations and maps - although maybe that's in part because I read that as a teenager, and was very taken with it then! :-) J. Noel Chiappa 17:29, 14 March 2008 (CDT)

Under each year we have the Western Front, Eastern Front etc. Is the aim to have a broad survey of all the main operations of every year listed fluidly or section by section lists, such as those done today with the Somme and Verdun? Denis Cavanagh 08:43, 29 March 2008 (CDT)

It probably looks like I'm seeking credit there, now that I look at my post! My grandfather in particular was obsessed with the Somme, something like five or six young men died from his little townland in Cavan alone. He used to have a load of books on it running around somewhere, I might take a look. Denis Cavanagh 09:24, 29 March 2008 (CDT)

Not too unusual (the death toll in his town); we visited the memorial at Thiepval (?) to the dead with no known graves (an incredible memorial - 16 huge square pillars covered with names [like the Viet Nam memorial in the US], arranged in four groups of four, supporting a central spire) which contains the names of all who died there who have no known graves - around 60K people if I recall! My parents found the name of someone from down the hill from where we lived. The day we were there (ca. 1971) there was a mason there chiselling a name off the wall. J. Noel Chiappa 11:54, 29 March 2008 (CDT)

Over here a townland is an area in the countryside. So like, it might only have a population of thirty to fifty people. Some townlands were bigger than others though, especially in those days. Denis Cavanagh 11:59, 29 March 2008 (CDT)

According to this report, a new source for information on the topic is in the making, and since it probably does not qualify for an External Link here, I just put it on this talk page. Alternatively, it could go to Great War Archive/External Links if that existed. --Daniel Mietchen 01:09, 20 December 2010 (UTC)

I've changed to "few dreamed". A few years beforehand a German general published a book predicting it in broad outline. I haven't read it so can't say exacly how accurate it was, but he even predicted Germany would probably lose but said they had to try anyway. Peter Jackson 10:41, 2 April 2011 (UTC)