This article is about the ship. For other uses of the term Titanic, please see Titanic (disambiguation). 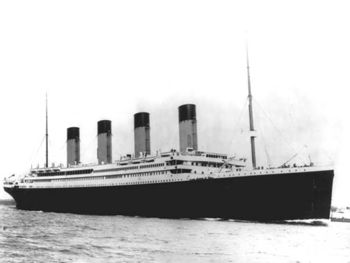 RMS[1] Titanic was a passenger liner that sank on its maiden voyage in April 1912 after it struck an iceberg in the North Atlantic Ocean. Although never officially named as "unsinkable", it was believed at the time that the Titanic's design would reduce the likelihood of such a disaster.

Titanic, along with its very similar sister ships Olympic and Britannic, was a British vessel built in Belfast at the Harland and Wolff shipyard for the White Star Line. It left Southhampton, England, on 10th April 1912, bound for New York via France and Ireland. After striking an iceberg late on 14th April, the ship sank in the early hours of the following day with the loss of 1,514 passengers and crew. Titanic had too few lifeboats for the more than 2,200 people on board, and many boats left with empty spaces due to a general failure to recognise the danger until it was too late.

The iceberg opened a gash in Titanic's starboard (right) side, flooding compartments along the hull. The bow started to sink first; pressure further down the length of the ship led it to split towards the stern section. The remains of the ship lie in two main pieces two-and-a-half miles (four kilometres) below the surface.

The loss of the Titanic is the world's best known maritime disaster, and forced a rethink of ship design and other safety measures. The wreck was rediscovered in the 1980s and since then various artefacts have, sometimes controversially, been raised. Titanic has over the years become a cultural icon, such that in April 2012 memorial events were held around the world to mark the centenary of the sinking, notably in Belfast, Southampton, and at the disaster site itself.

RMS Titanic was commissioned in 1907 and built from 1909 at the Harland and Wolff shipyard in Belfast, today in Northern Ireland, by a workforce of over 3,000 people over two years. By the time it was finished in 1912, eight men had been killed in construction accidents, including one on launch day. Titanic was then the largest artificial object in the world, 882ft, 8in (268m) long and 92ft (28m) wide, and similar in its dimensions to its sister ships, the earlier Olympic and the later Britannic.

Titanic had four funnels, the last actually being a false one that aided ventilation and was also used for storage. The ship also boasted a series of 16 compartments along the hull that would, it was believed, prevent the ship sinking as long as only up to four of them were flooded. First-class passengers could make use of rich-appointed cabins and other lavishly-decorated rooms, though the ship's interiors were no more luxurious than those of its competitors. It was also not the fastest vessel put to sea at the time, with a maximum of about 23 knots (about 27mph). The stern bore the name of the English city of Liverpool because the White Star Line had its head office there, but it sailed from Belfast straight to Southampton to begin its maiden voyage.[2]

Titantic, under the captainship of Edward Smith, left Southhampton, England, on 10th April 1912 on its maiden voyage, bound for New York via Cherbourg, France and Cobh, Ireland. From Ireland, the ship made its way out into the North Atlantic Ocean and towards an area known for ice. By the evening of 14th April, the ship was heading at speed towards its final destination when it struck an iceberg.

By the night of 14th April 1912, Titanic had received reports from other vessels of ice in the area, and had adjusted course to avoid some of this, but maintained speed. At about 9:40pm, Titanic received a message from the Mesaba steamer warning of a "great number" of icebergs and pack ice. An inquiry found that this message, the fifth received, was not delivered to any officers; at the time, the wireless radio operators were occupied in sending private messages for passengers. The sea was also calm that night, making it more difficult for the crew to spot an iceberg by the waves breaking against it. The sky was clear, but there was no moon.[3]

Frederick Fleet, a lookout in the crow's nest of the Titanic, spotted an iceberg dead-ahead at about 11:40pm. He contacted the bridge to relay the warning,[4] but in less than a minute Titanic had collided with the iceberg as the bridge crew shifted it towards port (leftwards). The starboard side scraped along the side of the iceberg, opening a gash towards the bow and allowing water to pour into hull compartments. The First Officer, William Murdoch, then directed the ship to starboard to prevent the stern and propellers from also striking the iceberg.

Survivors later described the experience of several bumps, but at this stage there was little alarm. One first-class passenger, Edith Russell, recalled that she went immediately to the promenade deck to view the iceberg as it shook ice onto the ship, before joining other passengers in using it for a snowball fight.[5] Likewise, Frederick Fleet, still in the crow's nest, then believed that the collision had been only a "narrow shave".[6]

The Titanic carried Marconi wireless radio apparatus, operated at the time of the disaster by Jack Phillips and Harold Bride. This equipment was relatively new and was not installed on all ships. Its purpose was mainly commercial, so the operators spent much of their time sending messages on behalf of passengers. The evening of the sinking was particularly busy, but after the collision Phillips and Bride started sending distress signals using the QCD code in use at the time, at first joking between themselves to keep their spirits up. At one point, Bride suggested that they switch to SOS, the new emergency signal ("It may be your last chance to send it"), and Phillips did so. They remained at their post until the last possible moment, with Phillips still tapping out messages for ten to fifteen minutes after the order to leave, and the two men eventually made to escape as water poured into the Marconi room. Phillips would not survive the night, but next morning, following treatment, Bride was aboard the rescue ship Carpathia in crutches but sending more messages for survivors.[7]

Over the few hours following the collision, the ship took on more and more water towards the bow section, which started to sink first. This put tremendous pressure further down the length of the ship and led it to split towards the stern section. This stayed afloat for a few minutes before also sinking in the early hours of 15th April, with the loss of 1,514 passengers and crew. Titanic had too few lifeboats for the more than 2,200 people on board, and many boats left with empty spaces due to a general failure to recognise the danger until it was too late.

The sinking was the subject of two separate inquiries either side of the Atlantic, one by the United States Senate and the other by the British Wreck Commissioner. Eyewitness and other testimonies were heard from, respectively, 19th April and 2nd May. As many survivors had been taken to the USA, the American inquiry went ahead first, at the Waldorf-Astoria Hotel in New York, for an 18-day period. The British inquiry was held over 36 days, and both inquiries produced detailed reports, including transcripts of witness testimonies. The disaster led to a lengthy series of safety recommendations; for example, the US committee demanded that all vessels carry sufficient lifeboats.[8] As for the cause of the disaster, the Wreck Commissioner concluded that the Titanic had sunk due to a collision with an iceberg while travelling at excessive speed.[9]

In response to the loss of Titanic, the International Convention for the Safety of Life at Sea (SOLAS) was created in 1914 to introduce new maritime safety procedures.[10] 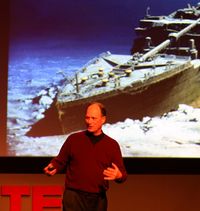 (CC) Photo: Erik Charlton
Robert Ballard, the oceanographer who rediscovered the Titanic, delivering a lecture about the ship at the 2008 TED conference.

The remains of the ship lie in two main pieces two-and-a-half miles (four kilometres) below the surface. It was rediscovered by oceanographer Robert Ballard in 1985, who was being secretly funded by the US Navy to find two of its wrecked submarines; Ballard took the opportunity to also locate the Titanic.[11] Since then, various artefacts have been raised, ignoring Ballard's view that the site should be protected as a grave and historical site.[12]

The Titanic disaster has proven to be fertile ground for the imaginations of everyone from film producers to conspiracy theorists, and interest in its story increased around the time of the 100th anniversary of the sinking. The National Geographic Society, for example, showcased new and highly-detailed photographs of the wreck in its magazine,[13] and other publications and broadcasts were made available around the world.[14] Memorial cruises were also planned to the site of the sinking, though one such trip suffered some troubles en route, which some commentators viewed as an omen.[15]

There have been several films abut Titanic, ranging from: a 1943 Nazi propaganda exercise; the inaccurate but well-crafted and well-received 1953 melodrama Titanic; the acclaimed A Night to Remember, a 1958 docudrama recounted mainly from the point of view of surviving Second Officer Charles Lightoller; and the 1997 big-budget take on the tragedy, directed by James Cameron. The 1997 film was the first major production to depict the vessel splitting into two pieces as it sank; previous productions had not shown this because the British and American inquiries into the disaster recorded that the ship had gone down intact, despite some eyewitness accounts to the contrary, and this erroneous version of events persisted for decades.[16]