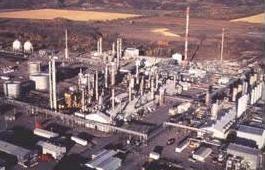 Natural gas processing plants are used to purify the raw natural gas extracted from underground gas fields and brought up to the surface by gas wells. The processed natural gas, used as fuel by residential, commercial and industrial consumers, is almost pure methane and is very much different from the raw natural gas.

Natural gas that comes from crude oil wells is typically termed associated gas. This gas can exist separate from the crude oil in the underground formation, or dissolved in the crude oil.

Raw natural gas can also come from methane deposits in the pores of coal seams. Such gas is referred to as coalbed gas and it is also called sweet gas because it is relatively free of hydrogen sulfide.

Raw natural gas is commonly collected from a group of adjacent wells and is first processed at that collection point for removal of free liquid water and natural gas condensate. The condensate is usually then transported to a petroleum refinery and the water is disposed of as wastewater.

The raw gas is then pipelined to a gas processing plant where the initial purification is usually the removal of acid gases (hydrogen sulfide and carbon dioxide). There a many processes that are available for that purpose as shown in the flow diagram, but Amine gas treating is the most widely used process. In the last ten years, a new process based on the use of polymeric membranes to dehydrate and separate the carbon dioxide and hydrogen sulfide from the natural gas stream is gaining acceptance.

The acid gases removed by amine treating are then routed into a sulfur recovery unit which converts the hydrogen sulfide in the acid gas into elemental sulfur. There are a number of processes available for that conversion, but the Claus process is by far the one usually selected. The residual gas from the Claus process is commonly called tail gas and that gas is then processed in a tail gas treating unit (TGTU) to recover and recycle residual sulfur-containing compounds back into the Claus unit. Again, as shown in the flow diagram, there are a number of processes available for treating the Claus unit tail gas. The final residual gas from the TGTU is incinerated. Thus, the carbon dioxide in the raw natural gas ends up in the incinerator flue gas stack.

The next step in the gas processing plant is to remove water vapor from the gas using either the regenerable absorption (chemistry) in liquid triethylene glycol (TEG)[3], commonly referred to as glycol dehydration, or a Pressure Swing Adsorption (PSA) unit which is regenerable adsorption using a solid adsorbent.[9] Other newer processes requiring a higher pressure drop like using membranes or dehydration at supersonic velocity using, for example, the Twister Supersonic Separator may also be considered.

Mercury is then removed by using adsorption processes (as shown in the flow diagram) such as activated carbon or regenerable molecular sieves.[1]

Nitrogen is next removed and rejected using one of the three processes indicated on the flow diagram:

The next step is to recover the natural gas liquids (NGL) for which most large, modern gas processing plants use another cryogenic low temperature distillation process involving expansion of the gas through a turbo-expander followed by distillation in a demethanizing fractionating column.[13][14] Some gas processing plants use a lean oil absorption process[11] rather than the cryogenic turbo-expander process.

The residue gas from the NGL recovery section is the final, purified sales gas which is pipelined to the end-user markets. 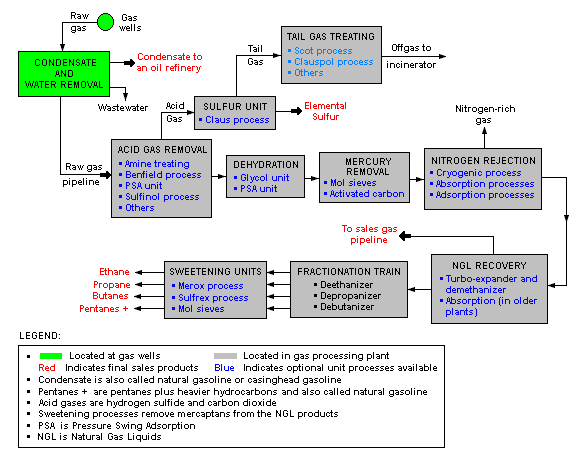