Hydrodesulfurization (HDS) or Hydrotreater is a catalytic chemical process widely used to remove sulfur compounds from refined petroleum products such as gasoline or petrol, jet fuel, kerosene, diesel oil, and fuel oils.[1][2] The purpose of removing the sulfur is to reduce the sulfur dioxide emissions that result from using those fuels in automotive vehicles, aircraft, railroad locomotives, ships, gas or oil burning power plants, residential and industrial furnaces, and other forms of fuel combustion.

The industrial hydrodesulfurization processes include facilities for the capture and removal of the resulting hydrogen sulfide gas. In petroleum refineries, the hydrogen sulfide gas is then subsequently converted into byproduct elemental sulfur. In fact, the vast majority of the 68,000,000 metric tons of sulfur produced worldwide in 2010 was byproduct sulfur from petroleum refining and natural gas processing plants.[3][4]

Although reactions involving catalytic hydrogenation of organic substances were known prior to 1897, the property of finely divided nickel to catalyze the fixation of hydrogen on hydrocarbon double bonds (e.g., (ethylene, benzene) was discovered by the French chemist, Paul Sabatier.[5] Thus, he found that unsaturated hydrocarbons in the vapor phase could be converted into saturated hydrocarbons by using hydrogen and a catalytic metal. His work was the foundation of the modern catalytic hydrogenation process.

Soon after Sabatier's work, a German chemist, Wilhelm Normann, found that catalytic hydrogenation could be used to convert unsaturated fatty acids or glycerides in the liquid phase into saturated ones. He was awarded a patent in Germany in 1902 and in Britain in 1903,[6] which was the beginning of what is now a worldwide industry.

By 2006, miniature HDS units had been developed for treating jet fuel to produce clean feedstock for synthesizing hydrogen for a fuel cell.[7] By 2007, this had been integrated into a small operating fuel cell generation system.

Many metals catalyse the HDS reaction, but it is those at the middle of the transition metal series that are most active. Ruthenium disulfide appears to be the single most active catalyst, but binary combinations of cobalt and molybdenum are also highly active.[8]

In practice, most HDS units in petroleum refineries use catalysts based on cobalt-modified molybdenum disulfide (MoS2) together with smaller amounts of other metals. Aside from the cobalt-modified MoS2 catalysts, nickel and tungsten are also used, depending on the nature of the feed. For example, nickel-wolfram (Ni-W) catalysts are more effective for hydrodenitrification (HDN). 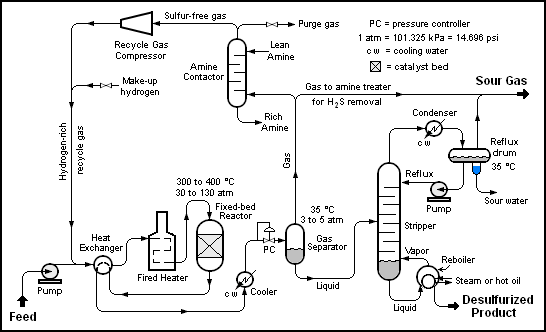 When the HDS process is used to desulfurize a refinery naphtha, it is necessary to remove the total sulfur down to the parts per million range or lower in order to prevent poisoning the noble metal catalysts in the subsequent catalytic reforming of the naphthas.

When the process is used for desulfurizing diesel oils, the latest environmental regulations in the United States, Europe and elsewhere requiring what is referred to as ultra-low sulfur diesel (ULSD) requires that very deep hydrodesulfurization is needed. In the early 2000's, the governmental regulatory limits for highway vehicle diesel was within the range of 300 to 500 ppm by weight of total sulfur. As of 2006, the total sulfur limit for highway diesel is in the range of 15 to 30 ppm by weight.[9]

The hydrogenolysis reaction is also used to reduce the nitrogen content of a petroleum stream and, in that case, is referred to Hydrodenitrification (HDN). The process flow scheme is the same as for an HDS unit. In fact, units may be designed for both hydrodesulfurization and hydrodenitrification and many are so designed.

Using pyridine (C5H5N), a nitrogen compound present in some petroleum fractionation products, as an example, the hydrodenitrification reaction has been postulated as occurring in three steps:[10][11]