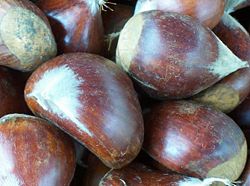 Chestnut is the common name for trees of the genus Castanea and their fruits. The name is also applied incorrectly to several other plants outside the genus, including the water chestnut (a grass-like aquatic plant) and the horse chestnut (similar to the chestnut tree, but its nuts are toxic). There are 8-10 species in the genus, the two best-known being the European and American species.

The European or sweet chestnut (C. sativa) is native to the Mediterranean area. It was used by the Romans to make flour, and is still widely cultivated for its edible seeds, which are eaten roasted or candied, and its durable timber.

The American chestnut (C. dentata) was once very common throughout the forests of eastern North America, but was decimated in the 20th century by chestnut blight (Cryphonectria parasitica), a fungal infection. The fungus is still endemic in all areas where the American chestnut survives. Resistant varieties intended to replace it have been created through hybridization with Asian species that are resistant to the blight.

Chestnut trees are deciduous, with deeply furrowed bark. The nuts are found in spiny pods which hold one to three seeds. The flowers are arranged on spikes, which usually carry male and female flowers together.