Arabidopsis thaliana is a small flowering plant widely used by plant biologists as a model organism for basic research. It has several common names including thale cress, mouse-ear cress or just Arabidopsis).[1] It is popular for research since it has a relatively short life cycle and its genome is one of the smaller ones. Due to its prominence in research it was the first plant genome to be sequenced.[2]

Arabidopsis is native to Europe, Asia, and northwestern Africa. It is an annual (rarely biennial) plant usually growing to 20–25 cm tall. The leaves form a rosette at the base of the plant, with a few leaves also on the flowering stem. The basal leaves are green to slightly purplish in colour, 1.5–5 cm long and 2–10 mm broad, with an entire to coarsely serrated margin; the stem leaves are smaller, unstalked, usually with an entire margin. Leaves are covered with small unicellular hairs (called trichomes). The flowers are 3 mm in diameter, arranged on an inflorescence with a helical phyllotaxy; their structure is that of the typical Brassicacaea. The fruit is a silique 5–20 mm long, containing 20–30 seeds. Roots are simple in structure, with a single primary root that grows vertically downwards, later producing smaller lateral roots.[3][4][5][6]

Arabidopsis can complete its entire life cycle in six weeks (see the catalog subpage). The central stem that produces flowers grows after about three weeks, and the flowers naturally self-pollinate. In the laboratory Arabidopsis may be grown in petri plates or pots, under fluorescent lights or in a greenhouse.[7]

Use as a model organism 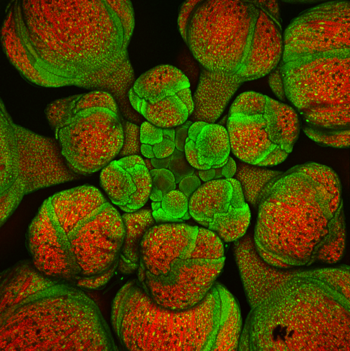 A confocal projection of the cluster of flowers surrounding the growing tip of Arabidopsis, showing the formation of cells with a large range of sizes on the sepals of the developing flowers. Cell nuclei and plasma membranes are shown in green; chloroplasts are in red for contrast.

Arabidopsis is widely used as one of the model organisms for studying plant sciences, including genetics and plant development.[8][9] It plays the role for agricultural sciences that mice and fruit flies (Drosophila) play in animal biology. Although Arabidopsis thaliana has little direct significance for agriculture, it has several traits that make it a useful model for understanding the genetic, cellular, and molecular biology of flowering plants.

The small size of its genome make Arabidopsis thaliana useful for genetic mapping and sequencing — with about 157 million base pairs[10] and five chromosomes, Arabidopsis has one of the smallest genomes among plants. It was the first plant genome to be sequenced, completed in 2000 by the Arabidopsis Genome Initiative.[2] Much work has been done to assign functions to its 27,000 genes and the 35,000 proteins they encode.[11]

The plant's small size and rapid life cycle are also advantageous for research. Having specialized as a spring ephemeral, it has been used to found several laboratory strains that take about six weeks from germination to mature seed. The small size of the plant is convenient for cultivation in a small space and it produces many seeds. Further, the selfing nature of this plant assists genetic experiments. Also, as an individual plant can produce several thousand seeds, each of the above criteria leads to Arabidopsis thaliana being valued as a genetic model organism.

Finally, plant transformation in Arabidopsis is routine, using Agrobacterium tumefaciens to transfer DNA to the plant genome. The current protocol, termed "floral-dip", involves simply dipping a flower into a solution containing Agrobacterium, the DNA of interest, and a detergent.[12] This method avoids the need for tissue culture or plant regeneration.

The first mutant in Arabidopsis was documented in 1873 by Alexander Braun, describing a double flower phenotype (the mutated gene was likely Agamous, cloned and characterized in 1990).[13] However, it was not until 1943 that Friedrich Laibach (who had published the chromosome number in 1907) proposed Arabidopsis as a model organism.[14] His student Erna Reinholz published her thesis on Arabidopsis in 1945, describing the first collection of Arabidopsis mutants that they generated using x-ray mutagenesis. Laibach continued his important contributions to Arabidopsis research by collecting a large number of ecotypes. With the help of Albert Kranz, these were organised into the current ecotype collection of 750 natural accessions of Arabidopsis thaliana from around the world.

In the 1950s and 1960s John Langridge and George Rédei played an important role in establishing arabidopsis as a useful organism for biological laboratory experiments. Rédei wrote several scholarly reviews instrumental in introducing the model to the scientific community. The start of the arabidopsis research community dates to a newsletter called Arabidopsis Information Service (AIS), established in 1964. The first International Arabidopsis Conference was held in 1965, in Göttingen, Germany.

In the 1980s Arabidopsis started to become widely used in plant research laboratories around the world. It was one of several model organisms, that included maize, petunia and tobacco, used for basic research.[14] The latter two were attractive since they were easily transformable with the then current technologies, while maize was a well established genetic model for plant biology. The breakthrough year for Arabidopsis as the preferred model plant came in 1986 when T-DNA mediated transformation was first published and this coincided with the first gene to be cloned and published.[15][16]