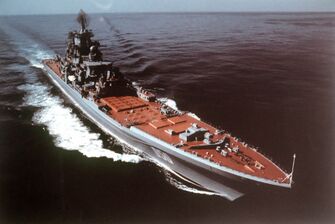 The Soviet Kirov class guided-missile cruiser is the largest warship other than aircraft carriers built by any nation since World War II. Originally named after the Soviet politician Sergei Mironovich Kirov, the class has been renamed the Admiral Ushakov class by the Russian Federation.

The first ship of its class, Kirov, was commissioned into Soviet fleet service in 1980. The ship was assigned the RKR (Raketnyy Kreyser, or missile cruiser) by the Soviets and a CGN designation by NATO. The cruiser was originally planned to locate and engage enemy submarines but it was found to be a much more capable warship when armed with the long-range P-700 3M-45 Granat anti-ship missile. It is likely that had the Cold War ever turned hot, the Kirov class cruisers together with Slava-class cruisers and Sovremenny-class destroyers would have used their long-range anti-ship missiles in part of a massive, multi-layered air, surface and submarine attack on US carrier battle groups.

Like the Burke-class, these ships are multirole, with anti-surface, anti-air and anti-submarine warfare systems. Most distinctive are their extremely large P-700 3M-45 Granat anti-shipping missiles.

Different ships in the class have 100mm or 130mm dual-purpose guns.

They have a layered air defense system, with long-range surface-to-air missiles designated SA-N-6 GRUMBLE by DIA and NATO, a navalized variant of the S-300 PMU (missile) system. The next layer is the SA-N-4 GECKO/9K33 Osa-M (missile), and they have been modified to take Kashtan autocannon/missile close-in weapons systems.

They are the only known examples of the CONAS system, in which the nuclear reactor is backed up by a fossil-fueled steam producer for the turbines.

Ships of its class