John B. Corliss was a lawyer, member of Congress, and business executive. 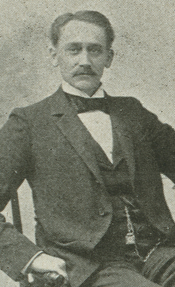 John Blaisdell Corliss was born on June 7, 1851, in Richford, Vt. He was first cousin to George Corliss. He was schooled at the Fairfax Preparatory School. In 1871, he received his B.A. from Vermont Methodist University at Montpelier. His first job was in the law office of Noble and Smith, attorneys for the Vermont Central Railway. Thereafter he enrolled in the Law Department of Columbian College, Washington D.C., graduating with honors in 1875.

He was a Scottish Rite mason. He was a member and director of the Michigan Club.

After graduation from law school, Corliss moved to Detroit, Michigan, passed the bar and started a law practice. In 1882, running on the Republican ticket, Corliss was elected city attorney, which he held until 1886. Among his accomplishments as city attorney was the writing of the city's first complete charter which was passed by the Michigan Legislature in 1884.

In 1893, he argued in favor of a Michigan woman's suffrage law before the Michigan Supreme Court.[3] The next year he was elected to Congress from Michigan's first district (Detroit). He served served four terms (until 1903). While in Congress, he chaired the Committee on Election of President, Vice President, and Representatives.

His political positions in Congress were both progressive and reactive. For instance, he sponsored a bill in 1897 for a Constitutional Amendment for the direct election of U.S. Senators. It did not pass then.[4] He also sponsored a pure food bill in 1902.[5] In his reactive side, he opposed liberal immigration laws, proposing an amendment to the immigration act that would bar foreign temporary workers from entering the U.S., a position heartily endorsed by the Michigan legislature.[6] He supported the acquisition of the Panama Canal zone and the construction of the Canal.[7]

He was defeated for re-election in the 1902 election, whereupon he returned to his Detroit law practice Corliss, Adruss and Leete. By 1920, he was elected to the Executive Committee of the American Bar Association.[8]

In 1889, Corliss along with A. R. McLaughlin contracted to construct the Ann Arbor Street Railway. The line was operating by September 30, 1890. They were apparently just the construction contractors, as they sold the company to Henry P. Glover and H. T. Morton on January 30, 1891.[9]

Corliss was also the principal investor in the Jackson Street Railway in Jackson, Michigan. The JSR went bankrupt in 1897 and was sold at auction in September 1900.

He died in Detroit on December 24, 1929 and is interred in Woodlawn Cemetery.