A history of biology tries to recognize the myriad ideas of individuals and groups curious about the myriad aspects of the living world, including those individuals whose ideas have all but disappeared from the everyday knowledge base of biology. It tries to follow the sometimes narrow, nearly closed, torturous, and sometimes wide-open breakthrough path of discovery about the workings of living things. It does not constitute an evaluation of the veracity of biological ideas, or attempt to give answers to the fundamental questions in biology, or even to define those questions.

We will try to heed the words of the editor of the Journal of the History of Biology:

An unrecorded history of biology began when prehistoric human foragers first started to accumulate information about the behavior of plants and animals in their environment, which they did presumably for its importance in helping them acquire food for subsistence.

Homo sapiens, emerged nearly 200,000 years ago, exhibiting unprecedented cognitive abilities. They could discriminate cause and effect widely in nature, they could speak and thus share knowledge and cooperatively accumulate it to pass it down the generations, and they could make tools — all prerequisites for a successful study of food sources for immediate practical purposes. Living as hunter-gatherers, they learned the details of the behavior of animals and plants as they needed to subsist and thrive in the wild. How they managed to organize and teach their knowledge we can only speculate. Reports of direct observations of 19th and 20th century hunter-gatherer societies, whose lifestyle resembled them give some appreciation of the likely expertise important for survival required of our hunter-gatherer ancestors.[2]

Beginning approximately 10,000 years ago, self-expanding biological knowledge in the Middle East plausibly played a major role in evolving productivity in agriculture and the domestication of wild animals such as dogs and sheep. Some biologists extrapolate backwards in time from historic processes to speculate on the knowledge-based aspects of the developments in cultivation and domestication for human benefit by prehistoric agriculturalists. Harold Morowitz, Yale Professor of Biology and Natural Philosophy, views prehistoric agriculturalists as ‘natural’ biologists and selectionists:[3]

Domestication provides for rapid evolution of the species employed. A selection for fitness was imposed by the domesticators. Thus, large seeds, fleshy fruits, and other desirable properties were selected in choosing for planting. In time this had its genetic consequences, and new strains emerged. Similarly, in animal populations selection for docility or size or some other feature would alter a species....Animal domestication might have been preceded by hunter-gatherers who captured orphaned young animals and raised them in captivity. This would have provided information necessary for large-scale animal domestication. In a very real sense, agriculture is a knowledge-driven activity. Knowledge must be communicated by language and must eventually be stored by writing.

Farming techniques were invented possibly independently in at least seven parts of the world, including the Middle East, Asia, Sub-Sahara Africa, and the Western Hemisphere.

The idea that the phenomena observed in nature resulted from natural causes that humans could potentially discover apparently originated in ancient Greece. C. Leon Harris writes that in the 6th century BC some Greeks:

became obsessed with the heresy that nature is not simply a whim of the gods, but that natural phenomena consistently follow particular causes which men can understand. There is no record of the idea prior to that time, and mankind was apparently cured of the fixation afterward, until it broke out again in the European Renaissance. Now, of course, this epidemic of science has infected us all.[4]

The science of biology begins in the 4th century BCE, with the work and though of Aristotle (384-322 BCE). He learned from earlier Greek thinkers who postulated biological explanations from observations of the everyday world, including:

Aristotle was founding father of biology through his lifelong wide-ranging observations of biological phenomena, his experimentation, his organization of information, his writing up reports and teaching students, and his basic philosophy that understanding reality required deductions and inductions from sense experience and not abstract postulations before the fact.[7] He noted that despite the enormous variety of living things, they showed very small gradations from less to more complex forms,

…that life has grown steadily in complexity and in power; that intelligence has progressed in correlation with complexity of structure and mobility of form; that there has been an increasing specialization of function, and a continuous centralization of physiological control. 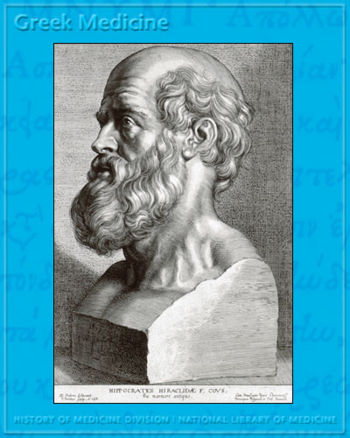 Of all the men in ancient Greece who shared the name, Hippocrates — a common Greek name like ‘Edward’ or ‘Lawrence’ in English — many such having distinguished themselves in Greek history in one way or other, only one Hippocrates, Hippocrates of Cos (c. 460 – 370 BCE), a physician, reigned with honor and respect during Western history to the present day. The revolution in medicine that he began and inspired so changed the course of Western civilization that the health and welfare of all humanity has benefited.

Hippocrates of Cos revolutionized the practice of medicine by transforming it from its mythical, superstitious, magical and supernatural roots to roots based on observation and reason — the roots of scientific objectivity — roots that have nourished an ever-growing evolutionary tree of Western scientific medicine still flourishing. For that reason History has bestowed on Hippocrates of Cos the honorific cognomen, “The Father of Medicine”, medicine’s progenitor. We might call him more accurately "The Progenitor of Western Scientific Medicine".

Aristotle, the founding father of the science of biology

Aristotle gave some thought to the question, "what is life?". He thought that a living thing existed in 'potentiality' in the seed or semen, that environment factors initiated the realization of that potential, and that potential included the "nutritive power" needed for it to grow into the living thing.[8] Corresponding to that triad of suppositions by Aristotle, though it takes more than semen to generate a human,[9] modern biologists teach that the 'potentiality' of the human exists as molecules in the semen and ovum, that the fluid composition in the oviduct, where the sperm and ovum meet, enables their fusion — the fertilization process that starts the life form — and that the zygote (the first cell of the human) has within itself the wherewithal to utilize its own organization to develop itself into a multi-cellular individual human.

Aristotle developed a coherent vision of the nature of living thing. His four components of the causes of complex natural things,[10] [11] anticipates the somewhat more refined modern systems biology approach to the question of life, wherein a living thing comprises:

Modern biologists go down the road started as a path by Aristotle, who would have been delighted to know he asked the right questions during his pathbreaking studies, even if he did not know how to get the right answers. Unfortunately, the larger fraction of his writings have disappeared, so we cannot know the full breadth of Aristotle's curiosity and biological adumbrations. What he did leave had a major effect on Western thought for centuries.

Holding ref: Dioscorides Pedanius, of Anazarbos; The Greek herbal of Dioscorides; illustrated by a Byzantine, A.D. 512; Englished by John Goodyer, A.D. 1655; edited and first printed, A.D. 1933, by Robert T. Gunther ... with three hundred and ninety-six illustrations; Imprint Oxford, Printed by J. Johnson for the author, at the University press, 1934

The dark and middle ages

A new birth of investigation in biology

Harvey discovers the Circulation of the Blood

How Darwinism evolved into multiple species of neo-Darwinism