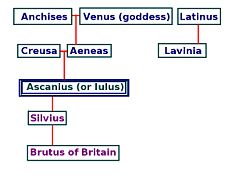 Ascanius was the son of Creusa and Aeneas, according to Virgil.

Ascanius is a character from Roman mythology who was the son of the Trojan prince Aeneas. His mother was Creusa, the daughter of Trojan King Priam, who perished in the escape from Troy. But Ascanius survived along with his father Aeneas, and both traveled to Italy. According to a slightly different legend, Ascanius may have been born in Italy with his father still being Aeneas, but with a different mother, the Italian princess Lavinia; this account comes from Livy, a Roman historian. Ascanius becomes a king in Italy after his father Aeneas dies.