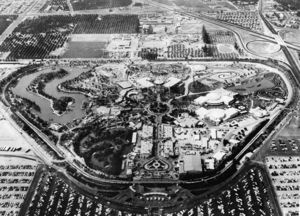 (PD) Photo: Los Angeles Examiner / USC Regional Historical Photo Collection
An aerial view of Disneyland in 1956, with the Disneyland Railroad route (which, at the time, encircled the entire park) visible.

Disneyland is a theme park located in Anaheim, California.

Walt Disney began to think about building a theme park as far back as the 1930s, when taking his two young daughters to a typical amusement park of the day. Sitting on a bench while they rode the rides, he started wondering why someone couldn't come up with a park which an entire family could enjoy together. It was not, however, until 1954 that he was able to begin work in earnest.

Construction began on July 16, 1954. Meanwhile, the Disneyland TV show was already promoting the park to viewers across the nation.

July 17, 1955, the day Disneyland opened to the public, became known as "Black Sunday". 11,000 tickets had been distributed to sponsors, suppliers, and employees, but some were copied or forged, and some people brought in entire families on a single ticket. The official attendance for the day was 28,154.

The park was not prepared to handle a crowd of that size. Every operating attraction experienced some sort of breakdown during the day. A plumbers' strike shortly before the opening had forced Disney to choose between having either working restrooms or working drinking fountains. The hot sun partly melted the asphalt on Main Street, trapping some visitors' shoes.

The next day's newspapers gave a nearly unanimous verdict: The park was a total disaster, an unmitigated folly, doomed to close soon.

However, thousands of people had already made plans, and Disneyland enjoyed strong attendance for its first month. The crowds dropped off after that, though. In the winter, setting the pattern for the next few years, attendance was so low that there were doubts as to whether the park would survive.

In the meantime, Disney's park designers, or "Imagineers", had plenty more ideas for new attractions. They were also climbing a steep learning curve as they quickly discovered what worked and what didn't. The result was a park in a constant state of flux almost from the moment it opened. Indeed, Walt Disney's intention was for the park to never be "finished", but always adding new features.

Stagnation and the Eisner era

After Walt Disney's death, work on Disneyland slowed to a crawl. In 1984, having seen five successive years of declining attendance at Disneyland, and with the movie studio floundering, Michael Eisner was brought in to be the chairman and CEO of Disney, and Frank Wells to be the president and COO.

At first, Eisner was a revitalizing force. Disneyland was once again opening new blockbuster attractions, and attendance was soaring. However, after Wells' death in 1994, Eisner became more and more focused on the bottom line, leading to aggressive cost-cutting and initiatives aimed at extracting the maximum amount of money per visit, to the detriment of visitor experience and safety. By the early 2000s, fans were glumly cataloguing peeling paint, disintegrating thatch, and other signs of neglect around the park. The nadir came in 2003, with a fatal accident on Big Thunder Mountain, attributed in part by OSHA to poor maintenance procedures[1].

The opening of Disney's California Adventure on February 8th, 2001 was the culmination of Eisner's cost-cutting approach. Where the cost of a second park had long been rumored to be around $2-3 billion, the price tag came in at a mere $1.2 billion. Attendance, however, was similarly below expectations. At first, Disney blamed "bad Internet buzz", of which there was certainly plenty. The biggest complaints were the cost of admission-- the same as Disneyland, with half the number of attractions-- and the puzzling choice of a California theme for a park which was already in California.

A series of special event promotions in 2002 and 2003 did little to raise attendance. The opening of the Tower of Terror there in 2004, and the move of the Main Street Electrical Parade (now Disney's Electrical Parade) from Disneyland to the California Adventure, combined with discount combination tickets, has raised it to more respectable levels, but it still draws far fewer people than Disneyland.

The chairman of the Disney Parks and Resorts division is Jay Rasulo. Ed Grier is the president of the Disneyland Resort, overseeing Team Disney Anaheim, the park administration.

Also involved is John Lasseter, whose as "Chief Creative Officer" of Disney has the ability to approve or block any major changes at the parks.

Overview of the resort today

Disneyland opened with 5 "lands": Main Street, USA; Fantasyland; Tomorrowland; Frontierland; and Adventureland. In 1966, the first addition was New Orleans Square, to provide a setting for the Haunted Mansion and Pirates of the Caribbean. In 1972, it added Bear Country, which was renamed Critter Country in 1988 with the opening of Splash Mountain. Mickey's Toontown was added in 1993.

Disney's California Adventure is roughly divided into three areas: Golden State, Hollywood Pictures Backlot, and Paradise Pier. In an ironic turn, this last area is a tribute to the seaside amusement parks which were so popular when Walt Disney's girls were little-- the very sort of place that he built Disneyland in response to.

Downtown Disney is a shopping area located outside the two parks. It was opened in 2001 along with Disney's California Adventure.

The Disneyland Hotel, despite its name, was not actually owned by Disney until 1988. In 1999, it was torn down and completely rebuilt. The Paradise Pier Hotel was also built on the site of a previous hotel, purchased by Disney in 1995. The third resort hotel is the Grand Californian, located inside Disney's California Adventure. It opened with the park.