Cotton is one of the oldest known crops in the world, being found in archeological sites from the first known settlements of humans from both the Old World and the New World. The cotton plant (Gossypium sp.) is in the mallow family, being closely related to other familiar plants like hibiscus, okra and hollyhock. After pollination, cotton blossoms form into bolls, which, when mature, contain long strands of pure cellulose lint, which is easily spun into yarn or thread to be used for various fabrics. The fibers are strong and interlock to add additional strength when twined to make fabrics that are strong, soft, and absorbant. The bolls also contain seeds, which are an important source of cooking oil and cattle feed. The seeds constitute about 15% of the total value of the crop. 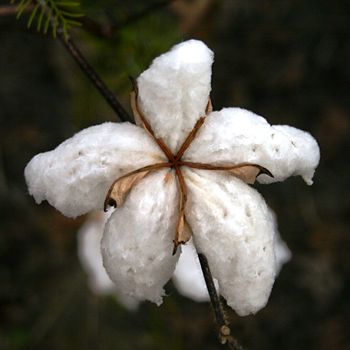 Following independence, cotton quickly became the primary crop of the American South, where it was produced using large umbers of African-American slaves. Cottton requires too long a growing season to be produced in the North. Southerners considered "King Cotton" so important on the world market (which they dominated) that they expected to obtain support from many nations when they entered into the Civil War. However, any possible support withered due to Union blockades of southern ports.

After Emancipation of the slaves, many of them became sharecroppers and continued growing cotton as their primary crop until the double curse of The Great Depression and the arrival of the boll weevil in the 1920s. This forced southern farms to diversify into production of other crops. With the development of new insecticides cotton made a comeback as a crop, and still is grown in the US "Cotton Belt" states, which consist of most of the southern states.

The historical explosion of the use of cotton occurred after the invention of the cotton gin by Eli Whitney in 1791. Cotton lint clings strongly to the seeds, making it slow and difficult to process cotton by hand. The gin used a toothed blade to catch the lint fibers and draw them through a slot, which was too small for the seed to follow. It speeded up the separation by about a factor of 50 times, and was a key factor in the development of the cotton industry. Other important developments in later years were mechanized spinning and weaving machines and machine harvesters. 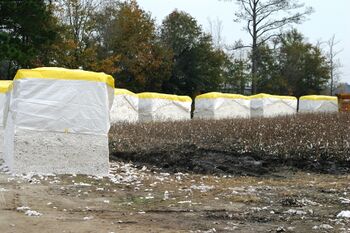 (GNU) Photo: David L Green
Truckload-sized cotton modules have replaced bales as the mode of transport. They are made by hydraulic press in a "module maker."

The cotton plant is a coarse, vigorous plant that produces around 100 flowers. After pollination, the plant forms squares, so called because the developing boll has three to five carpels. Within each developing boll are seeds and lint. Both the number of seeds and the weight of the lint are in direct proportion to the completeness of pollination.

During its early development the squares are easily damaged by various insect pests, such as boll weevils, boll worms, stink bugs and others. In the Twentieth Century, cotton became one of the most sprayed crops of all. At one time 25% of the total insecticide use was on cotton. Two factors have caused a decrease of insecticide usage. One is the development of Integrated Pest Management, which seeks, not to spray on a rigid schedule, but only when actually needed. IPM sets a threashhold of acceptable damage, then sprays in limited amounts for the purpose of keeping the damage below that threshold. Also IPM tries to protect natural predators and parasitoids that help control pest insects.

A second factor is genetic modification. One important type of GM cotton has created plants which can produce Bt, a natural insecticide to kill or ward off bollworms.

When the bolls are mature, they burst open to reveal the white cotton inside. The plant either dies from frost, or it is chemically defoliated so that the leaves mostly fall off before the cotton is mechanically harvested. The cotton is compressed by huge hydraulic presses into truckload-sized modules, which are covered with a tarp and left at the edges of the fields until the cotton gin plants can catch up to the harvest.

Early cotton gins were powered by turning mules, but the need for power to gin the cotton led to the development of much larger water powered mills. Prior to the Civil War much of the cotton crop was exported to mills in the North, or in Europe. But good water power sites in the South quickly developed into mill towns where raw cotton was ginned and processed into textiles with various uses.

Beginning in the late Twentieth Century, this large textile industry of the South was mostly destroyed by trade agreements that made it impossible to compete with textiles from the Caribbean and Southeast Asia that were produced with very cheap labor.

Cotton is used in many articles of clothing such as underwear, sweaters, shirts, trousers and dresses, and in towels and bed linens. A very strong weave is made into denim for work clothing. Some cotton is blended with synthetic fabrics for some articles of clothing. It is also used in thousands of other products as diverse as tampons, explosives, and paper.