William Henry Playfair FRSE (15 July 1790 – 19 March 1857) was one of the greatest Scottish architects of the 19th century. Born in Russell Square, London, he was an orphan at the age of six, and in 1794 he came to Edinburgh to live with his uncle John Playfair, the mathematician, geologist and a leading figure of the Scottish Enlightenment. [1] 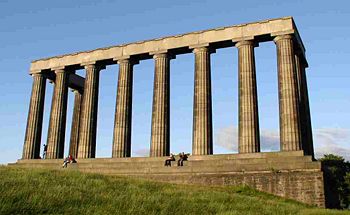 Between 1817 and 1824, he redesigned what is now the "Old College" building of the University of Edinburgh after winning a competition to complete what had begun in 1789, retaining the front as designed by originally designed by [[Robert Adam|Robert}} and James Adam. He went on to design many other public buildings in Edinburgh, many in the Greek Revival form of Classical architecture that was popular amongst some architects in the early 19th century, thereby helping earn Edinburgh the title 'Athens of the North'. Amongst these are the City Observatory on Calton Hill; Royal Terrace, Royal Circus, Regent Terrace and St Stephen's Church in Edinburgh's New Town; the Royal Scottish Academy; the monuments to Dugald Stewart, and to John Playfair and the National Monument (a replica of the Parthenon) on Calton Hill; the National Gallery of Scotland; Surgeons' Hall, for the Royal College of Surgeons of Edinburgh; Donaldson's College; New College (the University Faculty of Divinity); the Church of Scotland General Assembly Hall; and the monument to Lord Jeffrey in Dean's Cemetery.[2]