From Citizendium
(Redirected from Wilhelm II)
Jump to: navigation, search

William II or Wilhelm II (1859-1941) , German Emperor ("Kaiser") and King of Prussia. Taking power in 1888, he dismissed Chancellor, Prince Otto von Bismarck in 1890 and launched Germany on a bellicose "New Course" in foreign affairs, culminating in his support for Austria in the crisis of summer 1914 that caused World War I. Bombastic and impetuous, he overruled his civilian chancellors (Bismark 1888-90, Caprivi 1890-1894, Hohenlohe 1894-1900, von Bulow 1900-1909 and Bethmann-Hollweg 1909-1917), blundered time and again, made major diplomatic decisions on his own, and made critical military decisions without consulting the civilian government. An ineffective war leader, he lost the support of the army, abdicated in November 1918, and fled to exile in the Netherlands to escape trial for causing the war.

William, the eldest son of Frederick I and III and Victoria, daughter of Queen Victoria of Britain, was born Jan. 27, 1859. He was related to many royal figures across Europe, and as war loomed in 1914 was the cousin of, and on a first-name basis with, both Czar Nicholas II of Russia and king George V of Britain.[1] William suffered from birth with a crippled arm. He attended the "Gymnasium" (grammar school) of Cassel, served in the army, and studied law at the University of Bonn. On the death of his father after three months as Kaiser, William succeeded to the throne in June 1888. He entered upon the life and activities of the sovereign with such enthusiasm that he was soon in conflict with the Chancellor, Prince Otto von Bismarck, whom he forced to resign in 1890. Selecting chancellors more ready to follow his lead, the young emperor struck out on what is called the "New Course" (Neue Kurs) in Germany's policy, which soon lost it the friendship of Russia and, ultimately, Britain. The Kaiser, in a most tactless manner, refused to renew the Russian reinsurance treaty, which Bismarck considered extremely important, so that, entirely isolated, Russia turned to France and entered into the alliance which became the basis for the Triple Entente.

For thirty years William was the most prominent monarch of Europe. Thoroughly committed to his royal prerogative, he took an active part in every phase of the life of his time, whenever his fancy dictated, and, being unusually versatile and imaginative, often with real distinction. At times, however, he was led into serious mistakes. Major blunders included the Kruger telegram (1896, congratulating Boer rebels fighting Britain), the saber-rattling 1908 Daily Telegraph interview that angered and alarmed the British,[2] the brutal instructions to his brother Henry on the departure of the punitive expedition to China, his quarrel with Britain's Prince of Wales, and his reckless support of a tottering Austria-Hungary in the crises of 1908, 1912, and especially in 1914. Each blunder seriously damaged Germany's prestige and led to the tightening of the alliances against it. He was often used by his officials and allowed to take the blame in case of failure. The emperor's irrationality and instability were further aggravated by the generic weaknesses in the constitutional and political system in Germany, and alarmed leaders across Europe as Germany grew in industrial and military strength.

As a counter to the army, he used the Geheime Feldpolizei (secret field police), which had been created after a failed attempt on Bismarck's life in 1866. Headed by Wilhelm Stieber It protected the monarch, censored the German press (which was perceived as a potential political threat), and supplied him information independently of the army general staff.

Promoter of arts and science

William was an enthusiastic promoter of the the arts and sciences, education, and social welfare. He sponsored the Kaiser Wilhelm Society, for the promotion of scientific research; it was funded by wealthy donors and the state and comprised a number of research institutes in both pure and applied sciences. The Prussian Academy of Sciences was unable to avoid the Kaiser's pressure and lost some of its autonomy when forced to redefine its attitude toward engineering and award three new fellowships in engineering sciences as a gift from the Kaiser in 1900.[3]

William supported the modernizers as they tried to reform the Prussian system of secondary education, which was rigidly traditional, elitist, politically authoritarian, and unchanged by the progress in the natural sciences.

Above all he supported the rapid growth of the army and the navy, sponsoring the Navy League, and on repeated occasions he announced to the world that Germany's future lay on the sea. On the other hand senior naval officers were aghast at his participation in 1912 naval maneuvers. William's bumbling interference and caustic commentary revealed his insensitive, immature, and ignorant character.

The Kaiser played a decisive role in initiating the policies of naval and colonial expansion that caused a rapid deterioration in Germany's relations with Britain before 1914. William and his advisers consistently overestimated the influence of the British monarchy on British policy toward Germany and this had fateful consequences for German policy toward Britain, leading to an unwanted war in 1914.[4]

William more than anyone warned Europe in the 1890s of the "yellow peril", whereby hordes of Chinese would take over the globe and ruin western civilization. Few Europeans paid attention. In 1905 William said that the future would see a fight to the finish for the survival of either the "White" or "Yellow" nations and urged all white peoples to unite in the struggle. Expanding the empire into Africa and the Pacific, William supported brutal policies. In South-West Africa, the Germans exterminated up to 80% of the Hereros tribe, and were almost as devastating in German East Africa.

Very much sobered in the later years of his reign, and much concerned over the precariousness of Germany's position because of the weakness of the Triple Alliance (Germany, Austria, Italy) and the growing strength of the opposition Triple Entente (Britain, France, Russia), he abandoned his former methods. The question as to his guilt for World War I, which was written into the Treaty of Versailles, became a subject of bitter debate after the war. 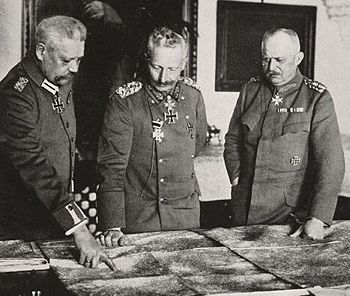 During the war he repeatedly tried to interfere with the work of the general staff, until it learned how to sideline him with endless briefings. His power was then limited to the appointment and dismissal of key personnel. His importance in the decision-making process was less a matter of his input into the decisions themselves than the people he appointed to make them. Ultimately, he acted as an "umpire," coordinating strategic planning between politicians and the military. The fact that he could delay or prevent policy measures through his veto power led people to anticipate his wishes and avoid decisions likely to meet with his disapproval.[5]

Upon the outbreak of the revolution in Germany, following the defeat of the German armies on the Western Front, he was practically dethroned by his Chancellor before he could abdicate, Nov. 9, 1918. With his fall, the entire monarchical and aristocratic system of Germany, Prussia, Bavaria and other states collapsed overnight. He fled to the Netherlands with hours to spare before his arrest by the new German government. There he lived in retirement in the village of Doorn. Prime Minister David Lloyd George won the British general election of December 1918 with the help of the slogan "Hang the Kaiser," but the Netherlands refused extradition. President Woodrow Wilson argued that punishing William for waging war would destabilize international order and lose the peace.[6] William died at Doorn on June 4, 1941.