From various statistics regarding activity, a marked decline in activity on Wikipedia appears to have happened in the 2006–2007 time frame. There is no generally accepted explanation for this decrease, although many theories have been proposed by "Wikipedians" and the Wikimedia Foundation (WMF). Coincidentally, some management changes occurred in this time frame, and in 2007 Jimmy Wales made Sue Gardner executive director of the WMF. 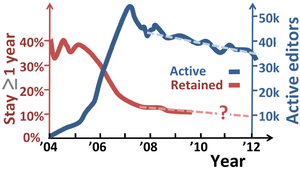 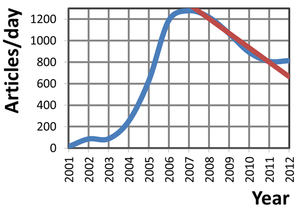 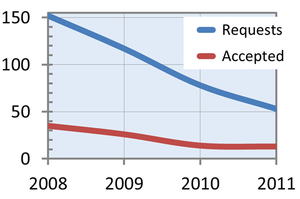 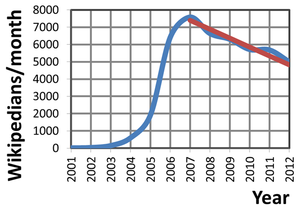 (PD) Image: John R. Brews
Number of newly registered contributors per month on English WP over its lifetime. Average drop in monthly enrollment is 515 per year (Data from Wikimedia.) 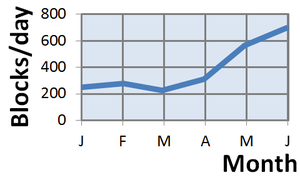 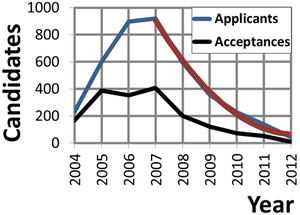 Many explanations as to the decline of activity on Wikipedia have been proposed. One aspect of the data that is hard to explain is the suddenness of the decline in activity; common explanations seem compatible with a slower change, not an abrupt one.

There is no single authoritative explanation as to why activity on Wikipedia has declined. It may be that the decline is a result of several factors.

One theory that has been proposed is that the decline is a symptom of Wikipedia's success. As Wikipedia became a household name starting in 2005, all of those wanting to contribute to such a project would likely have joined in that time frame, leaving fewer new editors in subsequent years. As well, as every obvious topic is covered in great depth, fewer people may have an incentive to begin contributing and, as it is only natural for people to leave online communities after around 18 months, the result is a net decline.

Another theory holds that Wikipedia's culture and infrastructure have become more closed and less accepting of new users over time. In order to cope with a major influx of new users beginning in 2004–2005 or so, many policies, procedures, and tools were put in place. These have the side effect of making it difficult for new users to make good faith contributions. There are now automated and semi-automated tools that revert vandalism, but their many false hits often mean that new users making contributions in good faith are quickly made unwelcome and banned. As well, a vast number of pages are now "semi-protected", making it impossible for new users to make good-faith contributions to those pages. Anonymous users are unable to create new pages. Thus, many people may not even begin contributing in the first place.

Anecdotal evidence has suggested that contributors are driven off by excessive conflict and friction, caused by administrators and editors who regularly act in an unfriendly, contentious way. The very rapid increase in the number of administrators in the same time frame as the decline in activity might not be coincidental.

Finally, it may just be that there are many more things to do on the Internet now than there were in 2005, and people only have so many hours in the day. If people are, say, spending more time on Facebook, they may not be able to spend as much time on Wikipedia.