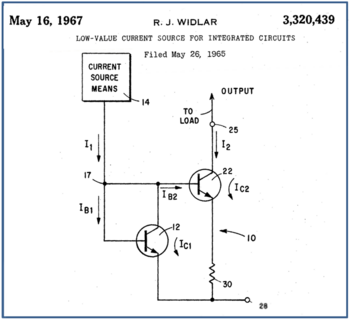 A Widlar current source is a modification of the basic two-transistor current mirror that incorporates an emitter degeneration resistor for only the output transistor, enabling the current source to generate low currents using only moderate resistor values, which means less area is needed in an integrated circuit.[1][2][3]

The Widlar circuit may be used with bipolar transistors, MOS transistors, and even vacuum tubes. An example application is the 741 operational amplifier,[4] and Widlar used the circuit as a part in many designs.[5] 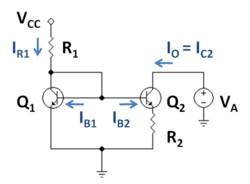 The figure is an example Widlar current source using bipolar transistors, where the emitter resistor R2 is connected to the output transistor Q2, and has the effect of reducing the current in Q2 relative to Q1. The key to this circuit is that the voltage drop across the resistor R2 subtracts from the base-emitter voltage of transistor Q2, thereby turning this transistor off compared to transistor Q1. This observation is expressed by equating the base voltage expressions found on either side of the circuit in the figure as:

where VT is the thermal voltage.

This equation makes the approximation that the currents are both much larger than the scale currents IS1, IS2, an approximation valid except for current levels near cut off. In the following the distinction between the two scale currents is dropped, although the difference can be important, for example, if the two transistors are chosen with different areas.

To design the mirror, the output current must be related to the two resistor values R1 and R2. A basic observation is that the output transistor is in active mode only so long as its collector-base voltage is non-zero. Thus, the simplest bias condition for design of the mirror sets the applied voltage VA to equal the base voltage VB. This minimum useful value of VA is called the compliance voltage of the current source. With that bias condition, the Early effect plays no role in the design.[9]

where IS is a device parameter sometimes called the scale current.
The value of base voltage also sets the compliance voltage VA = VBE1. This voltage is the lowest voltage for which the mirror works properly.

Finding the current with given resistor values

The inverse of the design problem is finding the current when the resistor values are known. An iterative method is described next. Assume the current source is biased so the collector-base voltage of the output transistor Q2 is zero. The current through R1 is the input or reference current given as,

Rearranging, IC1 is found as:

These three relations are a nonlinear, implicit determination for the currents that can be solved by iteration.

This procedure is repeated to convergence, and is set up conveniently in a spreadsheet. One simply uses a macro to copy the new values into the spreadsheet cells holding the initial values to obtain the solution in short order.

The transcendental equations above can be solved exactly in terms of the Lambert W function. 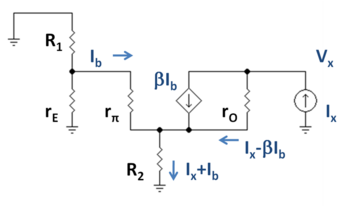 An important property of a current source is its small signal incremental output impedance, which should ideally be infinite. The Widlar circuit introduces local current feedback for transistor

. Any increase in the current in Q2 increases the voltage drop across R2, reducing the VBE for Q2, thereby countering the increase in current. This feedback means the output impedance of the circuit is increased, because the feedback involving R2 forces use of a larger voltage to drive a given current.

Using Kirchhoff's voltage law from the ground connection of R2 to the ground of the test current:

or, substituting for Ib: 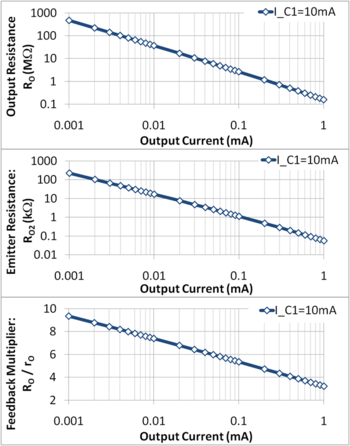 is the output resistance due to the Early effect when VCB = 0 V (device parameter VA is the Early voltage).

From earlier in this article (setting the scale currents equal for convenience):

Consequently, for the usual case of small rE, and neglecting the second term in RO with the expectation that the leading term involving rO is much larger:

Increase of IC1 to increase the feedback factor also results in increased compliance voltage, not a good thing as that means the current source operates over a more restricted voltage range. So, for example, with a goal for compliance voltage set, placing an upper limit upon IC1, and with a goal for output resistance to be met, the maximum value of output current IC2 is limited.

Eq. 6 for RO depends upon selecting a value of R2 according to Eq. 5. That means Eq. 6 is not a circuit behavior formula, but a design value equation. Once R2 is selected for a particular design objective using Eq. 5, thereafter its value is fixed. If circuit operation causes currents, voltages or temperatures to deviate from the designed-for values; then to predict changes in RO caused by such deviations, Eq. 4 should be used, not Eq. 6.