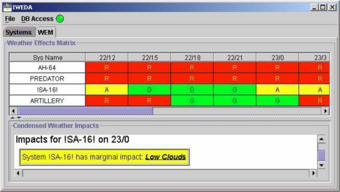 Effect of weather on Army systems

Weather can affect a great many aspects of military operations and national power, so weather intelligence is the provision of meteorological information organized to be useful in military and other decisionmaking. The graphic, "weather impact", shows a processed weather intelligence display, summarizing the effects of weather on friendly, as well as hostile systems such as the SA-16 surface-to-air missile. [1]

Weather information can be critical at the shortest of ranges, such as artillery and aircraft performance, for which U.S. Air Force special operations weather personnel can provide information at the battlefront or behind enemy lines. Weather information can be critical at the longest of ranges, such as winds in the target area of an intercontinental ballistic missile. Applications such as missile targeting, or optimizing the performance of imagery intelligence satellites, can warrant the weather information to be classified at the highest compartmented control system levels (i.e., Sensitive Compartment Information or SCI). [2]

On a broader strategic level, weather intelligence plays an important part in economic intelligence analysis of national capabilities. Weather patterns, for example, will help predict national agricultural production. It is not surprising, therefore, that the U.S. Air Force Weather Agency is part of the United States Strategic Command.

In areas with harsh weather, weather information can help commanders determine if operations are, or are not, possible. During the Falklands War, British special operations helicopters missions failed due to "white-out" conditions of high wind with snow. It is said that the World War II German invasion of the Soviet Union underestimated the three best generals: General Snow, General Mud, and General Cold.