The real proportionality constant v2 had dimension (length)2 over (time)2, i.e., v has the dimension of speed. In the simplest case v is independent of x and t (homogeneous space) and independent of f (no dispersion).

The wave equation can be generalized to three dimensions,

The quantity v has again dimension of speed (length over time); ∇2 is the Laplace operator; t is the time; r represents the space coordinates, r ≡ (x, y, z). In classical physics it is commonly the case that the function f(r,t) is real and observable. Examples of the meaning of f and v will be discussed below. In an isotropic space v does not depend on direction.

In 1727 John (Johann) Bernoulli studied the vibrations of a discrete number of masses connected by springs that satisfy Hooke's law. He derived a difference equation for the displacement ψk(t) of the kth mass as a function of time. In 1746 the work was extended by Jean Le Rond d'Alembert in his attack on the vibrating string problem typified by the violin string.[1] To treat the continuous string d'Alembert increased the number of masses, letting their number go to infinity, while the size and mass of each individual "bead" went to zero, such that the mass density ρ of the string (mass per unit length) remained finite and constant over the string. In this manner d'Alembert derived the equation

where T is the tension (force along the string, also taken constant over the string). He derived a solution of the form

and emphasized that infinitely many curves f and g other than sinusoidal curves are modes of vibration. The 1747 article contains the first appearance of the wave equation in print. Note that the dimension of ρ/T is:  M/L (M L/t2)−1 = (t/L)2, where the force T (mass times acceleration) has dimension ML/t2. In total, ρ/T has indeed the dimension of one over speed squared.

Solution of the one-dimensional equation 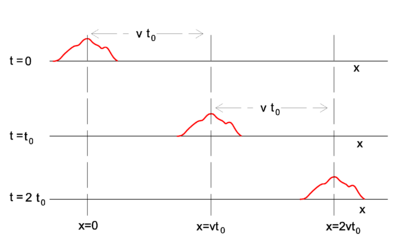 PD Image
Fig. 1 A non-periodic solitary wave traveling along x-axis to the right with constant speed v. At t=0 the wave is given by the function f(x) of x, at t=t0 by f(x−vt0), etc.

Any arbitrary differentiable function of the form f(x − vt) is a solution of the one-dimensional wave equation for constant (independent of x and t), real, and positive v. Hence any function f of x − vt may be called a wave. In contrast to what is often assumed, a wave (solution of the wave equation) does not have to be periodic, so that concepts like wave length and period are not necessarily defined. An example is given in Figure 1, where the red curve depicts an arbitrary wave propagating along the x-axis in positive direction. Snapshots at the times t=0, t=t0, and t=2t0 are depicted. At t=0 the red curve is the function f(x) that has non-zero values only in the neighborhood of x=0. At t=t0 the red curve has the very same shape, but has non-zero values only in the neighborhood of x=vt0. Note that the argument of f in the latter point on the x-axis is: x−vt0 = 0.

In order to prove that f(x − vt) satisfies the wave equation, we write

It is to be shown that the product function

is a solution of the wave equation for any real twice-differentiable function f of a single variable. Indeed, by the chain rule one gets,

and it follows that h(x,t) ≡ f(x−vt) satisfies the wave equation.

The same steps can be followed for f(x + vt). Hence f(x±vt) satisfies the wave equation. In a notation less strict than just used—but notwithstanding obvious—this can be written as

Note that f(x+vt) for x=−vt has the same value as f(0) at t=0. In other words, the function moves along the negative x-axis.

The initial condition, the form f(x) of f at t = 0, specifies (partly) the wave. [2] Because f(x ± vt) differs from f(x) only by a translation of magnitude vt along the x-axis, (−vt in positive direction, +vt in negative direction), it is apparent that the function moves along the x-axis with velocity v, the velocity of wave propagation.

where f and g are arbitrary twice differentiable functions of one variable.

In order to specify physical solutions the wave equation must be supplemented by boundary conditions. Let us impose the conditions:

When physically ψ(x,t) stands for the motion of a string of length L, this condition means that both ends of the string are clamped, which is the case for musical string instruments. In order to satisfy the boundary conditions, the functions f and g must be related by the equations

the first boundary condition is satisfied:

where the substitution vt = −(L+u) was made to obtain the expression after the arrow.

Notice that the part of f(x) lying between x = 0 and x = L is arbitrary, which corresponds to the physical fact that a string can be started vibrating from any shape whatsoever (subject to its ends being fixed). In particular, its shape need not be sinusoidal, proving that solutions other than the normal modes (to be discussed in the next section) can occur.

Normal modes of a string

The archetypal example of a wave is the transverse motion of a string constrained to vibrate in a plane. Let y(x,t) be the transverse displacement of the string from its equilibrium. The wave equation is

where, as first shown by d'Alembert, the velocity v is √T/ρ. The tension T as well as the linear mass density ρ (mass per length) are constant over the string. The wave equation is derived under the assumption that the slope of the spring is small:

. This holds if the maximum displacement of the spring is much less than its length.

The equation may be solved by a method known as separation of variables. One makes the Ansatz

where F depends on x only and G on t only. Substitution of the Ansatz into the wave equation gives

The equation on the right has a left-hand side solely depending on x, while its right-hand side depends solely on t. This can only be correct if both equations are equal to a constant, independent of x and t. Let us write −k2 for this constant, where k may be complex in principle. We will, however, assume k to be real and hence will retrieve a restricted set of solutions, the normal modes. The wave equation separates into two equations,

and to call ω the angular velocity. Special solutions of the spatial and temporal equations are:

General solutions are linear combinations of these functions.

Let us next assume that the string is clamped for x = 0, that is, the displacement is zero for x = 0. This boundary condition excludes a cosine type solution, so that the spatial equation is of the form sinkx. If the string has length L and its end is also clamped, it follows that

It is common to write

Here λ, a quantity with a dimension of length, is called wave length. In figures 2, 3. and 4: λ= 2L/1, 2L/2, and 2L/3, for the first vibration (the "fundamental"), the second (the "first overtone"), and the third (the "second overtone"), respectively. These sinusoidal modes of the string are its normal modes.

This condition excludes the function sinωt, because the first derivative of the sine is the cosine which is not zero at t = 0. Hence the time function is of the form cosωt. In total, the solution with given boundary and initial conditions is

A function of this form is a standing wave. Clearly, this function repeats itself after a time period t0 with

where T is the tension and ρ is the mass density. The reciprocal period is the frequency,

One may wonder whether the solution has the general form found by d'Alembert and discussed in the previous section. Note to that end that

which implies the following choices: (i) the initial displacement (amplitude) A = 0.3, (ii) the length of the string L = π, (iii) the propagation velocity v = 1, and (iv) the radial velocity ω = kv = n. These choices are compatible: the choice of L fixes a unit of length and the choice of v fixes a unit of time; these units can be fixed independently. The d'Alembertian operator defined by

This solution of the wave equation is shown in figure 5.

Consider an undisturbed fluid particle at position x and let its displacement, caused by a disturbance at time t, be in the z direction, so that after being disturbed the particle is at position: x + z(x,t). If the slope satisfies

Here ρ is the density of the fluid, ρ0 the undisturbed density, and P(ρ) the pressure in the fluid.

If the fluid is air, then

is the speed of sound. There may be 3-dimensional motion in the general case, satisfying the 3-dimensional wave equation, with an appropriate modification of the parameters. However, if is the fluid is homogeneous and isotropic, the extension is without any difficulties.

In a region of space where the charge and current densities are zero, Maxwell's equations for the electromagnetic field in vacuum lead to

where E is the electric field and B is magnetic induction (also known magnetic flux density). The quantity c is the speed of light in vacuum. The vector potential A and the scalar potential φ give rise to both E and B through

where in SI units k = 1 and in Gaussian units k = c. Both A and φ satisfy wave equations (that hold in absence of charge and current densities); they are