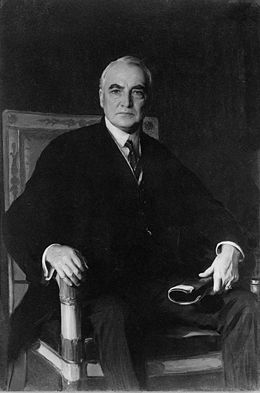 Warren G. Harding was 29th President of the United States, 1921-23. He was a Republican from Ohio, elected in a landslide in 1920. His administration is best known for the scandals that erupted, but he has been praised for his appointments of strong cabinet members, especially Charles Evans Hughes at State, Andrew Mellon at Treasury, and Herbert Hoover at Commerce, as well as William Howard Taft as Chief Justice and Charles G. Dawes as budget director (a new position)

Morello (2001) shows that advertising genius Albert Lasker sold candidate Harding to the American people by using new advertising strategies and techniques, borrowed from business and from the wartime bond campaigns. Lasker used the three pillars of consumer advertising: "reason why" selling, which compared products directly--aided especially by Harding's photogenic image; testimonial advertising, using endorsements by famous people; and "preemptive advertising," which rushed to claim common characteristics as unique features of the advertised commodity. Lasker used new technology such as movies. He adjusted the front porch campaign style used by McKinley in 1896 to shield his weak candidate from uncontrolled public scrutiny. Lasker launched a sharp, relentlessly negative campaign against the policy failures of incumbent Democrat Woodrow Wilson. The result, Morello concludes, was a triumph of modern advertising technique which propelled the Republicans back into the White House and furthered the commodification of candidates in modern electoral contests.

Grant (1995) shows that during World War I the U.S. loaned over $4 billion to Britain. This British war debt was not part of the agenda of the Paris Peace Conference or the 1921 settlement of the Reparation Commission. In response to an appeal by President Harding in his 1921 state of the union address, Congress passed the World War Foreign Debt Commission Act in 1922. The commission was mandated to determine each European nation's debt and negotiate payment over a period up to 25 years. In 1923 the British government agreed to pay $4.6 billion, with an initial payment of $4.1 million, the remainder to be paid over 62 years at 3% interest for the first ten years, 3.5% thereafter. Britain was able to pay because it received large war reparations annually from Germany. Germany in turn borrowed the money from the U.S. During the Great Depression President Herbert Hoover suspended all payments, and they were never resumed.

Irwin (2003) shows that the Harding Navy department oversaw or initiated the development of fleets of aircraft carriers, the strengthening of submarine forces and naval aviation, and the Marine Corps' adoption of amphibious assault strategies, all of which contributed significantly to US naval success in World War II.

Rader (1971) challenges the view that the tax policies of Harding's Treasury Secretary, Andrew Mellon, reversed the progressive policies of the Wilson years and allowed the wealthy to become wealthier. A congressional coalition of Democrats and insurgent Republicans shared responsibilities with Mellon for the tax legislation of that period, which was written by civil servants in the Treasury. The new rates were very low for most people, and yet were high enough to retire the war debt and generate a budget surplus. The net effect of this legislation, Rader argues, was to "impose more progressivity on the federal income tax structure than has existed in any other peace-time period of American history."

Winters (1990) examines Harding's farm policies and those of Henry Cantwell Wallace, the Secretary of Agriculture (1921-24). Wallace's handling of the postwar collapse of land values and the weakening of the farm economy was inconsistent and largely ineffective because of conflicting views of the value of agriculture in society. On one hand, he saw farming as a business that needed to improve its efficiency; on the other hand, he saw farmers as "yeoman," a special group, embodying republican virtues of independence, which deserved to be subsidized. Programs based on one view often negated those based on the other. Hoover meanwhile argued that the long-term solution lay in modernizing agricultural machinery, seeds, animal breeding and, especially, business practices.

Harding undertook a grueling, cross-country, speech-making trip in the summer of 1923, despite a chronic heart condition. He died in San Francisco on 2 August 1923.

Fine (1990) explains why Harding's reputation took a nose dive, as the new president Calvin Coolidge blamed the troubles of the day on his dead predecessor. "Reputational entrepreneurs" attempt to control the memory of historical figures through motivation, narrative facility, and institutional placement, says Fine. Men remembered as great heroes or great vilains or evil are explained by the Durkheimian theory of consensus and cohesion, but this does not explain the memory of the "incompetent" like Harding. Reputational politics is an arena in which forces compete to control memory. Reputations are grounded in a social construction of character, subsequently generalized to policy and the character of the society. In the case of Harding, the president rated lowest by historians and the public, political opponents set the agenda, while potential supporters did not defend him, given their political interests, structural positions, and a lack of credible narrative.