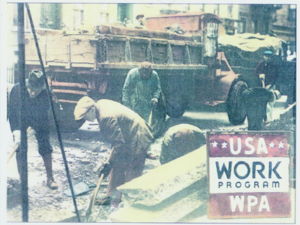 The Works Progress Administration (later Work Projects Administration, abbreviated WPA), was created on May 6, 1935 by Presidential order (Congress funded it annually but did not create a permanent agency.). It was the largest and most comprehensive New Deal agency, employing millions of people and affecting every locality.

It continued and extended the FERA relief programs started by Herbert Hoover and continued under Franklin D. Roosevelt. Headed by Harry L. Hopkins, the WPA provided jobs and income to the unemployed during the Great Depression . It built many public buildings and roads, and as well operated a large arts project. Until it was closed down by Congress in 1943, it was the largest employer in the country — indeed, the largest employer in most states. Only unemployed people on relief were eligible for most of its jobs. The hourly wages were the prevailing wages in the area, but workers could not work more than 30 hours a week. Before 1940, there was no training involved to teach people new skills. 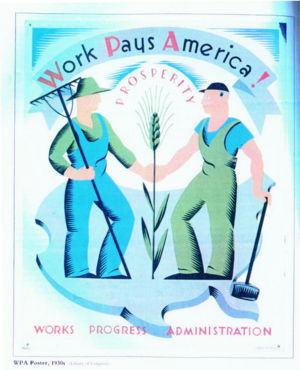 Though some 90% of WPA projects were directed at unskilled blue-collar workers, it also took in many unemployed white-collar artists, musicians, actors, doctors, and writers in such projects as the Federal Theater Project and the Federal Writers' Project.

Over 8,500,000 Americans were hired through the WPA mostly to work in manual labor, building roads and making parks. Unemployed artists and writers were given work through a branch of the WPA known as the Federal Writers’ Project. Among the most compelling products of the Writers' Project are the interviews with former slaves.[2] A sampling of projects includes:

The target recipients were household heads on relief (about 15% of whom were women). Youth programs were operated separately by the National Youth Administration, or NYA. The average worker was about 40 years old (about the same as the average family head on relief).

The WPA reflected the strongly-held belief at the time that husbands and wives should not both be working (because they would take one job away from a breadwinner.) A study of 2,000 women workers in Philadelphia showed that 90% were married, but wives were reported as living with their husbands in only 15 percent of the cases. Only 2 percent of the husbands had private employment. "All of these [2,000] women," it was reported, "were responsible for from one to five additional people in the household." In rural Missouri 60% of the WPA-employed women were without husbands (12% were single; 25% widowed; and 23% divorced, separated or deserted.) Thus only 40% were married and living with their husbands, but 59% of the husbands were permanently disabled, 17% were temporarily disabled, 13% were too old to work, and the remaining 10% were either unemployed or handicapped. An average five years had elapsed since the husband's last employment at his regular occupation. [Howard 283] Most of the women worked in sewing projects, where they were taught to use sewing machines and made clothing, bedding and supplies for hospitals and orphanage.

The share of FERA and WPA benefits going to blacks exceeded their proportion of the general population. The FERA's first relief census reported that more than two million black Americans were on relief in early 1933, a fraction of the black population (17.8%) that was nearly double the proportion of whites on relief (9.5%). By 1935, there were 3,500,000 blacks (men, women and children) on relief, almost 30 percent of the black population; plus another 200,000 black adults were working on WPA projects. Altogether in 1935, about 40 percent of the nation's black families were either on relief or were employed by the WPA. [3]

Civil rights leaders initially complained that black Americans were proportionally underrepresented. African-American leaders made such a claim with respect to WPA hires in New Jersey: "In spite of the fact that Negroes indubitably constitute more than 20 per cent of the State's unemployed, they composed 15.9 per cent of those assigned to W.P.A. jobs during 1937."[4] Nationwide in late 1937, 15.2% were African American. The Urban League magazine Opportunity hailed the WPA: [5]

It is to the eternal credit of the administrative officers of the WPA that discrimination on various projects because of race has been kept to a minimum and that in almost every community Negroes have been given a chance to participate in the work program. In the South, as might have been expected, this participation has been limited, and differential wages on the basis of race have been more or less effectively established; but in the northern communities, particularly in the urban centers, the Negro has been afforded his first real opportunity for employment in white-collar occupations. 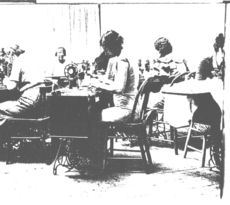 Sewing projects were set up for women.

The goal of the WPA was to employ most of the unemployed people on relief until the economy recovered. Harry Hopkins testified to Congress in January 1935 why he set the number at 3.5 million, using FERA data. At $1200 per worker per year he asked for and received $4 billion.

"On January 1 there were 20 million persons on relief in the United States. Of these, 8.3 million were children under sixteen years of age; 3.8 million were persons who, though between the ages of sixteen and sixty-five were not working nor seeking work. These included housewives, students in school, and incapacitated persons. Another 750,000 were persons sixty- five years of age or over. Thus, of the total of 20 million persons then receiving relief, 12.85 million were not considered eligible for employment. This left a total of 7.15 million presumably employable persons between the ages of sixteen and sixty-five inclusive. Of these, however, 1.65 million were said to be farm operators or persons who had some non-relief employment, while another 350,000 were, despite the fact that they were already employed or seeking work, considered incapacitated. Deducting this two million from the total of 7.15 million, there remained 5.15 million persons sixteen to sixty-five years of age, unemployed, looking for work, and able to work. Because of the assumption that only one worker per family would be permitted to work under the proposed program, this total of 5.15 million was further reduced by 1.6 million--the estimated number of workers who were members of families which included two or more employable persons. Thus, there remained a net total of 3.55 million workers in as many households for whom jobs were to be provided." [6]

The WPA employed a maximum of 3.3 million in November 1938. Worker pay was based on three factors: the region of the country, the degree of urbanization and the individual's skill. It varied from $19/month to $94/month. The goal was to pay the local prevailing wage, but to limit a person to 30 hours or less a week of work. 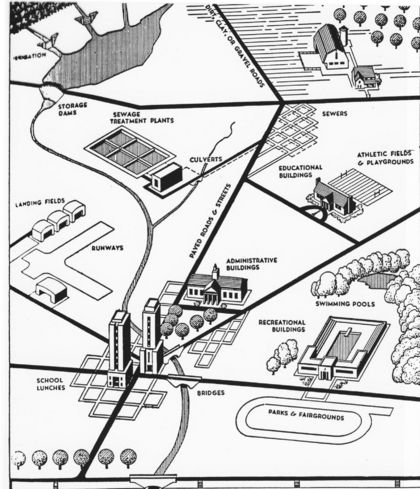 About 10% of the WPA went for cultural programs to support unemployed white collar workers, writers, artists, actors and musicians in four major programs, the Music Project, the Writer's Project, the Arts Project, and the Theatre Project - While providing cultural stimulation, the WPA also had drawbacks. Oftentimes mediocrity was perpetuated by using persons of limited talent; likewise, political rather than aesthetic criterion for judging success and poor editing (in the case of the Writer's Project) led to stifling of creativity. A harmonious working relationship between the artists and the agency was never adequately established. Further, individuals were often subjected to censorship, used as propaganda, and imposed on by Congressional committees seeking political aggrandizement.[7] The Federal Theatre Project from its establishment in 1935 until its demise in 1939 was directed by Hallie Flanagan. Theatre centers nationwide produced a wide variety of plays independently and simultaneously, including works by Sinclair Lewis, George Bernard Shaw, and Eugene O'Neill. The Federal Theatre Project produced both regional and national projects and struggled against censorship and cuts in funds for four years before it was ended for political reasons. The Federal Writers' Project directed by Henry G. Alsberg, operated in every state to produce an American Guide Book. It undertook a massive collecting process on a county level throughout the country and produced not only a national guide but also one for each state and numerous localities. The Historical Records Survey, directed by Luther H. Evans, employed 3400 unemployed librarians, archivists, teachers and others, who located and inventoried the public records of every state, such as county records on births, marriages, and deaths, church and cemetery records, newspapers, schools, and memorabilia. It also created an index to the federal census of 1900, which was used to authenticate the ages of people who had no birth certificate but were eligible for old age assistance. The Federal Music Project sponsored thousands of concerts across the country. In San Diego the Federal Opera Company made "Cavalleria Rusticana" its first production, with the WPA sewing project making costumes. "Gondoliers" was the second offering and the first to go on the road. By 1937, 73 performances of a variety of shows had been offered to 73,000 people.

The National Youth Administration was the WPA's youth division. Work study projects provided jobs for high school and college students. Unlike the CCC it enrolled women. The NYA ran training programs--even alternative high schools run outside the public school system--to provide training in skills that would not compete with labor unions. 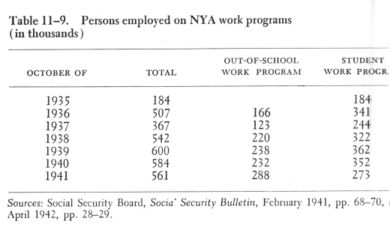 "in Russellville, Arkansas, 31 NYA boys... are working on a complete campus for out-of-school, unemployed Arkansas youth. We saw some of these young men building dormitories and a supervisor's house. The plans call for four dormitories to house 96 youth, a recreation hall, a dining hall, athletic grounds, and, adjacent to this campus, a poultry house, barn, and machinery repair shop. The boys may also choose work and related training in auto mechanics, power plant operation, or diversified agriculture. In these four Arkansas Resident Centers that we visited, boys and girls do NYA work 100 hours a month to earn $25 each, of which they pay $18 for board and room and 50 cents into a co-operative medical fund." 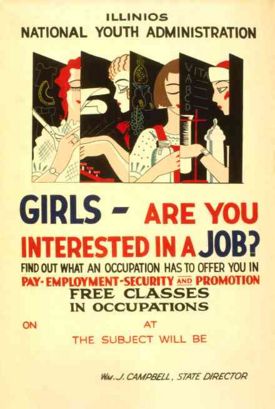 The WPA had numerous conservative critics unlike the Civilian Conservation Corps, which was quite popular. One of the principal criticisms was that the program wasted federal dollars on projects that were not always needed or wanted. A relic of this criticism survives today in the form of a satirical observation that WPA workers were hired 'to rake leaves in the park.' White-collar WPA projects in particular were often singled out for their sometimes overtly left-wing social and political themes. One criticism of the allocation of WPA projects and funding was that they were often made for political considerations. Congressional leaders in favor with the Roosevelt administration, or who possessed considerable seniority and political power often helped decide which states and localities received the most funding. The most serious criticism was that Roosevelt was building a nationwide political machine with millions of workers. The Hatch Act of 1939 outlawed political activities on government time. 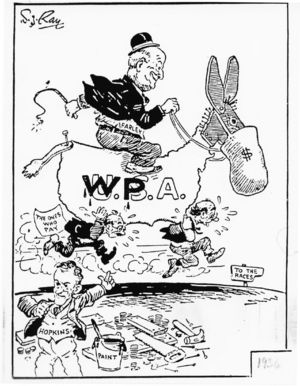 The WPA's enemies ridiculed the weak work habits it encouraged, by cruel jokes, calling it "We Poke Along," "We Piddle Along" or "We Putter Around." This is a sarcastic reference to WPA projects that sometimes slowed to a crawl, because foremen on a government project devised to maintain employment often had no incentive or ability to influence worker productivity by demotion or termination. This criticism was due in part to the WPA's early practice of basing wages on a "security wage," ensuring workers would be paid even if the project was delayed, improperly constructed, or incomplete. 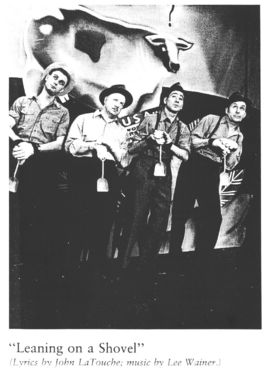 The WPA Theatre project produced a play that satirized the common "leaning on a shovel" criticism.

In 1940 the WPA changed policy and began vocational educational training of the unemployed to make them available for factory jobs. Previously labor unions had vetoed any proposal to provide new skills. Unemployment disappeared with the onset of war production in World War II, so Congress shut down the WPA in late 1943.