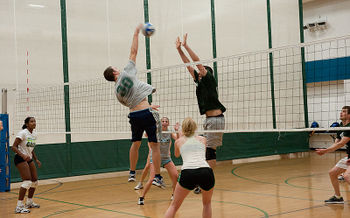 A game played at the Tulane University Volleyball Club in 2012.

Volleyball is a sport in which two teams of six players oppose each other on a court divided by a high net. They use their hands to direct the ball over the net. Teams accumulate points gained in each service. Service is similar to tennis except that it is done by hand. To win a point, the team must volley the ball over the net so that it makes contact with the floor inside their opponent's half of the court. The volley must be completed within three touches. Catching and holding the ball are not allowed. For example, when the service is received, one player can palm the ball upwards to keep it off the ground. A second player can then volley it over the net or else palm it towards a third player who must complete the volley. If the ball is volleyed out of court or into or below the net, the point is awarded to the other side. If the team makes four or more touches before volleying, they lose the point that way.

The sport's governing body is the International Volleyball Federation (Fédération Internationale de Volleyball; FIVB). Volleyball has been played at the Olympic Games since 1964 and its variant, beach volleyball, since 1996.