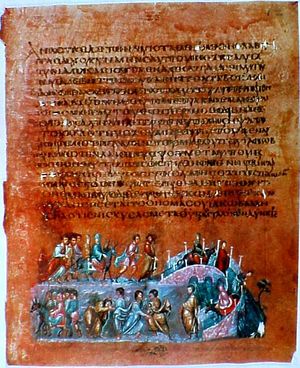 Folio 12 verso. The story of Jacob.

The Vienna Genesis (Vienna, Österreichische Nationalbibliothek, cod. theol. gr.31) is an illuminated manuscript, probably produced in Syria in the first half of the 6th Century. It is the oldest well-preserved, surviving, illustrated biblical codex.

The text is a fragment of the Book of Genesis in the Greek Septuagint translation. The text is frequently abbreviated . There are twenty-four surviving folios each with a miniatures at the bottom of both sides. It is thought that there were originally about ninety-six folios and 192 illustrations. It is written in uncials with silver ink on calfskin parchment dyed a rich purple. This shade of purple dye was also used to dye imperial cloth.

The Vienna Genesis may have been produced in the same period and place as the Rossano Gospels and the Sinope Gospels.