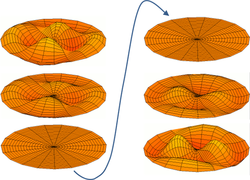 (PD) Image: John R. Brews
Snapshot of one possible vibration of a circular membrane at successive instants of time. Here is an animated version.

Mechanical systems that vibrate exhibit a restoring force when displaced from their equilibrium configuration, and an inertia that causes the restoring motion to overshoot the equilibrium position, resulting in a periodic motion that normally damps out over time.

From an energy viewpoint, such systems exhibit the capacity to store potential energy in a spring-like mechanism, to convert it to kinetic energy by virtue of their motion, and to gradually return to equilibrium through some damping mechanism that dissipates the energy of vibration.[1]