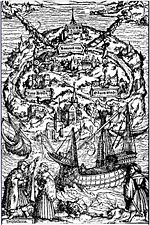 "A map of the world that does not include Utopia is not worth even glancing at." --Oscar Wilde

Utopia is the name of a fictional society created by Sir Thomas More as a satire on his own, European, society; by extension, it has come to represent all ideal societies, real or imagined. There have been many fictional utopias created before and after More's 1516 book; it can be safely stated that there has never been a true utopia in the real world. The name Utopia is generally taken to have been formed from the ancient Greek οὐ, "not", and τόπος, "place" as can be seen in later literary utopias such as Samuel Butler's Erewhon (nowhere written backwards) and News from Nowhere by William Morris. It can also be taken as beginning with εὖ, "good".[1]