In this page, I collect pieces and figures, which can be used to build-up tetration.

Analytic tetration is defined as mathematical function that coincides witht the tetration at integer values of the argument and is analytic outside the negative part of the real axis. Existence of such a function is postulated; and arguments in favor of uniqueness of such a function are considered. The algorithm of evaluation is suggested. Examples of evaluation, pictures and tables are supplied. The application and the generalization is discussed.

The colleagues indicated so many misprints in my papers about tetration, posted at my homepage [1], that I want to give them opportunity to correct them in real time.

to edit this file.

I consider the topic very important and urgent. The analytic tetration should be investigated and discussed right now; overvice, the non-analytic extension may become an ugly standard in mathematics of computation; the implementation of hige numbers with non-analytic tetration would make difficult realization of arithmetic operations and cause a lot of incompatibilities.

This is my apology for posting this research now, while the rigorous proof of existence and uniqueness of the analytic tetration is not yet found. My believe is based on the numerical check of the hypothesis of the existence and uniqueness, on smallness of the residual at the substitution of the function to the tetration equation and beauty of the resulting pictures. I cannot imagine that the agreement with 14 decimal digits occurs just by occasion without deep mathematical meaning.

In such a way I apologize for postulating of statements which should be prooven by the rigorous mathematical deduction.

and so on. However, such definition is good only for positive integer values of

. In general, the superexponential can be defined through the Abel equation

with additional condition that

Then, at least for positive values of

and positive integer values of

, such a definition can be used for the evaluation of tetration.

In this paper, the way to define tetration for non-integer argument is described. For real values of the argument, at

, such a tetration is plotted on figure 0. In the following sections, I describe, why is it so important, how to define the tetration for non-integer values of the argument, how can it be evaluated with high precision and why it is the only correct way to define analytic tetration.

There exist many basefuncitons such that the supercunctions can be expressed in the closed form. For some function

can be expressed with simple and explicit formulas, the basefunciton

In such a way, the table below can be constructed.

One can consider to add the additional argument, replacing

. This may have sense, while

is allowed to have only integer values. However, at the implementation of "good" tetration, the "argument"

can be considered as inverse superexponential of some argument,

; in the way, similar to that of convential logarithms: it is sufficient to investigate properties of natural logarithm ln; then, any other can be expressed as

The generalization to non-integer values of

is possible. While writing formal expressions (and assuming existence of the inverse function

In this section, I write

; omitting indices. However, you may recover them at any moment.

(I am not sure which notation is best. D.)

The speculation of the previous subseciton can be written shorter.

You can put subscript

in the defuction above, and it will be seen, that we have no need to deal with funciton of 2 variables, considering

. However, we need to specify, what set shold be

from in the deduction above: must they be positive integer, or they can be real, of they can be also complex numbers.

History of tetration and huge numbers

Perhaps, every researcher used to see diagnostivs "floating overflow" at the evlauation of an expression with huge numbers....

Ambiguity of the real-analytic extension

is defined with the Abel equation

and assume the condition

The analytic extension of tetration

-plane, at least for some values of base

. However, it has no need to grow infinitely in the direction of imaginary axis. For mathematics of computation, it would be better, if

, with, probably, countable number of cuts and singularities at

within some range, where

are fixed complex numbers, and

is eigenvalue of logarithm, solution of equation 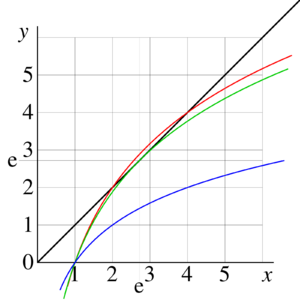 there exist one solution

, there are no real solutions.

Few hundred straightforward iterations of equation (14) are sufficient to get the error smaller than the last decimal digit in the approximations above.

of equation (14) are plotted in figure 2 versus

FIg.2. parameters of asymptotic of tetration versus logarithm of the base

The thin black solid curve at

represents the real part of the solutions

of (14); the thin black dashed curve represents the two options for the imaginary part; the two solutions are complex conjugaitons of each other. Let

in equaiton (13) has sense of asymptotic increment. Consider possible values of

are plotted in Figure 2 with thick solid lines;

In such a way, at

, there exist positive increment, which corresponds to

and means, that the perturbation

of the stationary solution grows up in the diredtion of real axis; there exist negative increment (decrement, if you like), which corresponds to

and indicates, that the perturbation grows up in the opposite direction. At

, there may exist tetration

with two different asumptotics. At large positive values of

it decays to the

and At large negative values of

it decays to the

. The real part of

is plotted with thick solid line, and the imaginary part is shown with thick dashed line. The real part is positive; id est, the perturbation

grows up in the direction of real axis.

is shown in FIgure 2 with dotted lines; for the case when period is negative, the minus period is plotted. It is amaising, that at

, the imajinary part is slightly larger than unity and remains almost constant.

While one deal with solutions of system (10), (11) at the real axis, one imagine some real-analytic extension shown in Figure 0 and consider also

Such a funciton is also soluiton of the Abel equation; at

is real and passes through the same points as </math>~F</math> at integer values of the argument.

and at small values of coefficients

looks smooth, and it is difficult to guess, which of them is "true". For this reason, for the standard mathematical representation, the non-analytic stepwice funciton uxp was suggested [2].

However, the difference between functions

becomes seen, if one of them, for example,

, is analytic and regular in some wide range, function

will be analytic only within the strip

; order of magnitude of

can be estimated with

At larger values of the imaginary part of the argument, the periodic function

Various functions may satisfy equations (2),(3). For an abstract excersise in comlex functional analysis, all animals are created equal. However, for the applicaitons in the computational mathematics, some of them are more equal than other [3]. As such a more equal animal we should choose the solution with simplest behavior, with minimum of singulatities, and easiest for the evaluation.

At small base, both values of quasiperiod are pure imaginary. This periodic or quasi-periodic behavior is similar to that of the conventional exponential, but function

does not grow to infinity in the direction of the real axis, aproaching eigenvalue

of logarithm. One example of such a behavior

is shown in Figure 3 for

. The following section describes, how it was ploted.

. This corresponds to the exponential growth of the asymptotic solution in the direction of the real axis; at large positive values of

the asymptotic does not approximate the function which grows faster than any exponential.

Examples of tetration at different bases 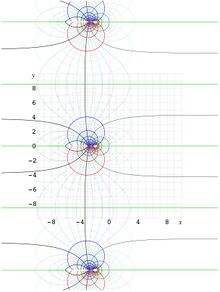 and levels of integer

For evaluation of Tetration we need to assume that it exists, and has asymptotic (30).

Consider the case of

. at fixed values of real part of the argument, the function has periodic behavior in the direction of imaginary axis, as it is shown in Fig. 3. In this figure, the example with

is used. Function is periodic; period

At non-zero values of the imaginary part of the argument, the function decays to these asymptotiv values.

At the real axis, the

Due to the periodicity, the function has cuts also at

As all other tetrations, it has singularity at 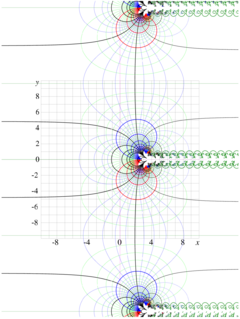 at the complex plane

and levels of integer

Along the real axis, such a solution grows up faster than any exponential; it is always larger than 4 and therefore cannot be equal to unity; so, it is not possible to satisfy condition

just shifting its argument for some constant. The behavior of tetration

, the larger is the growth.

as solution of equation (1) can be calculated if we withdraw condition (2), and substitute it to

Such a solution is shown in Figure 3b.

Other, more singular tetrations can be obtained by light periodic deformation of the argument.

with unit step. Levels of integer values of the real part and the same for imaginary part are shown with thick lines.

This Ackermann function is plotted in fig.4. As base

, the function is not periodic. However, there are asymptotic periods

in the upper and lower half-planes. In vicinity of positive part of the real axis, the function shows rapid growth, and it is not possible to draw the levels there. All the singularities of the Ackermann function are at the negative integer values smaller than

Fig.5.Analytic tetration at the base e ,

plane. The grid covers the range (

is the most natural choise. In this case, the increment

is equal to the asymtotic value

At the translation for inity along the real axis, 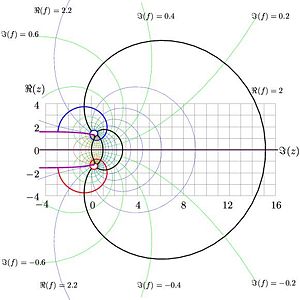 Fig.7. Inverse of the analytic tetration

Inverse of the natural tetration can be considered as superlogarithm. Equilines of funciton

are shown in Figure 7. Levels of integer real part and those of integer imaginary part are shown with thick lines. This function has two branchpoints at eigenvalues of logarithm. In the figure, the cuts are placed along the lines

; then, the function is regular in vicinity of the real axis, approaching the limitig value

and slowly growing up at positive values of the argument.

Analytic tetrations are shown for base

. In the similar way, the tetration on other bases (for example,

Knowledge of the asymptotic behavior gives the key to the efficient evaluation.

See also the discussion at http://math.eretrandre.org/tetrationforum/forumdisplay.php?fid=3

There exist many basefuncitons such that the supercunctions can be expressed in the closed form. For some function

can be expressed with simple and explicit formulas, the basefunciton

In such a way, the table below can be constructed.