USS Reuben James (DD-245) was an 1920-vintage Clemson-class destroyer, which was the first U.S. destroyer sunk as a result of the Second World War. She was on a "neutrality patrol", escorting Lend-Lease convoy HX-156 to Britain, when she was sunk, on 31 October 1941 by the German submarine U-552.

The name Reuben James has a long tradition in the U.S. Navy, beginning with Boatswain's Mate Reuben James in the Barbary Wars. Already wounded on 1804, he deliberately took a cutlass blow aimed for his captain, Stephen Decatur. [1] 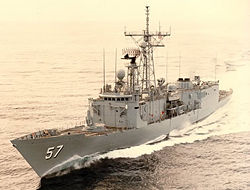 In 1941, DD-245 was in a blocking position between ammunition ship in the convoy and the known position of a German U-Boat Wolfpack. Of the crew, 44 survived and 115 died. All officers including the Commanding Officer, LCDR H.L. Edwards, were lost. The sinking was immortalized in a Woody Guthrie ballad:[2]