A Wasp-class U.S. Navy amphibious assault ship (LHD), the USS Boxer went into U.S. operational service in 1995. She is the sixth ship to carry that name in the U.S. Navy, the first four being sailing warships and the fifth a light aircraft carrier. 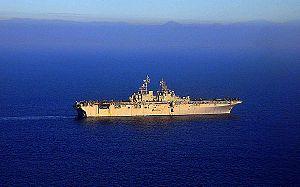 She has a crew of 1174 and can carry 2070 Marines. Displacing 40,500 tons, she looks superficially like an aircraft carrier, but can only operate helicopters and short-takeoff-vertical-landing (STOVL) aircraft.

In April 2009, she was the flagship of Task Force 151, under RADM Michelle Howard and Expeditionary Strike Group 2 in the waters off Somalia. She carries U.S. Marine Expeditionary Unit 13. CAPT Mark Cedrun commands the Boxer.