This page is about the rock group. See U-2 Dragon Lady for the aircraft. 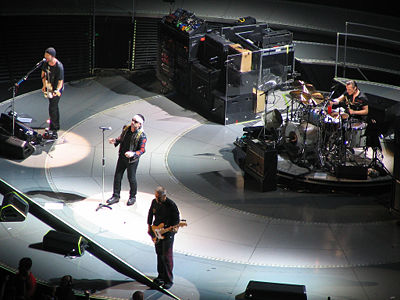 Singer Paul "Bono" Hewson, bassist Adam Clayton, drummer Larry Mullen Jr. and lead guitarist Dave "The Edge" Evans are better known collectively as the rock group U2. In a career spanning four decades, the band have released 11 studio albums and have won an impressive 22 Grammy Awards. All four members have pursued other musical collaborations, and Bono especially has made a name for himself as an outspoken campaigner on such issues as AIDS and debt in the developing world.

U2 were formed in the autumn of 1976, when the then 14-year-old drummer, Larry Mullen, placed a note seeking band members on the noticeboard at his Dublin, Ireland secondary school, Mount Temple Comprehensive. Seven members turned up for the first practice session, which took place in Mullen's kitchen. Over the next 18 months, the band's name went through several iterations,[1] and they whittled their membership down to the current four-piece. They played their last gig as a five-piece (under the name "The Hype") in March 1978, with The Edge's brother, Dick Evans, ceremonially walking off stage half way through the set. The four-piece "U2" continued the gig. 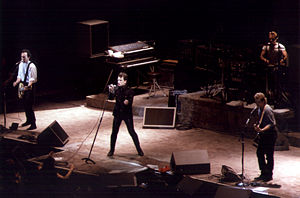 After acquiring a manager in Paul McGuinness, the band released their debut EP, U2 Three, in September 1979, on the CBS label. After signing to Island Records, they released their debut album, Boy, in September 1980. Two further albums, October and War, followed in 1981 and 1983 respectively, and were well received. War debuted at number 1 in the United Kingdom album charts. This album featured the single Sunday Bloody Sunday, which contrasted the events of the Irish Troubles, especially Bloody Sunday, with those of the Easter Rising.

After the hard loud rock sound of War, U2 felt themselves standing at a career crossroads; for their fourth studio album they desired to explore new musical directions, but were unsure how to proceed. The band’s gut feeling was an unorthodox one: they chose to approach the avant-garde, cerebral Brian Eno. Although Eno was indeed one of the most innovative and acclaimed of modern musicians, his music was in sound and spirit very different from the U2 of War.

At face value, U2 and the English-born Eno were worlds apart. While U2 were raw and fiery with guitars and drums, Eno, a technical genius, built home-made machines to create new sounds, forever experimenting with new technological ways of generating music. He had proven himself to be a wizard of the production studio who brought out the best in whoever artist he produced (such as David Bowie and then Talking Heads, for example), but by the time U2 came calling, Eno was busy exploring what he called “ambient music”, creating odd soundscapes and entrancing atmospheric sonic textures that were mellow and contemplative, far from either hard rock or catchy tunes. At first Eno had no desire to work with U2, preferring to continue on with his ambient music in collaboration with the immensely talented but still relatively unknown Canadian musician Daniel Lanois, who preferred spare and folksy melodies. U2 somehow persuaded Eno to produce their next album, and Eno brought Lanois with him.

“They were ready to embrace some new colours,” Lanois recalled, years later. [2] “ They wanted a greater emotional perspective in their music,” Eno explained. [3] Eno and Lanois acted as guides for a new musical direction for U2. Eno and Lanois, approaching the project as more than simply producers and engineers, virtually became the fifth and sixth members of the band, contributing backing vocals and playing instruments. The marriage of the formerly gritty and gutsy U2 with the mystical and contemplative Eno and Lanois led to the richly atmospheric and passionate The Unforgettable Fire (1984). Its first single, “Pride (In the Name of Love)”, about civil rights leader Martin Luther King, (in which Eno can be heard singing in the background), became U2’s biggest hit yet, breaking into the American top 40 and rising to number 33. An excellent performance in the Live Aid concert in Wembley Stadium, London, in aid of Ethiopian famine relief, and which was televised globally, helped the band's fame.

The collaboration which Eno had first frowned upon had flourished magnificently. U2 had altered artistically; they now had a deeper, richer, more lyrical and mesmerising sound. But the great success of The Unforgettable Fire would be mere prelude to the band’s second collaboration with Eno and Lanois: The Joshua Tree.

Eno and Lanois + U2 = Bigger and Better

U2’s fifth studio album, The Joshua Tree (1987) was the groundbreaking moment in U2’s career, their defining, decisive moment. A spectacular success, The Joshua Tree became their first number one album in both the U.K. and the U.S., sold over 25 million copies worldwide, and gave the band their first number one singles in America: “With or Without You” (with its Eno-esque atmosphere) and then the more Lanois-oriented “I Still Haven’t Found What I’m Looking For.” It was The Joshua Tree that firmly fixed U2 in the admiring eyes of the world. The Joshua Tree won the Grammy for Album of the Year, the highest honor the music industry can bestow. At the moment U2 were at the top, they had reached the pinnacle of musical success, playing to sold-out stadiums across the globe.

Eno once described U2 as “looking for a way to unlock something that they suspect is in their music, but they can’t quite get out.” [4] Eno and Lanois got it out. (Lanois once mused: “ ‘What is it that you do?’ people say. My answer is, ‘I raise the spirit.’") [5] Eno and Lanois helped raise U2 up into the biggest band in the world. With the continuing collaboration of their two super-genius producers, U2 would retain that superior position for many years to come.

The band's next studio album, Achtung Baby, released in 1991, revealed a marked departure from their previous sound, incorporating dance, industrial and techno influences, and brought in new fans while alienating few of the old. 1993's Zooropa continued and expanded on these themes. The Zooropa tour, which preceded and followed the album's release, also saw a marked difference in U2's stage presence. This was as much multimedia event as rock gig, featuring Bono's sporting of alternate personas such as "MacPhisto" and "The Fly" and live "prank calls" to world leaders. Their final album of the 1990s, Pop, continued these themes.

Three further albums have been released since the turn of the millennium - All That You Can't Leave Behind, in 2000, How to Dismantle an Atomic Bomb, in 2004, and No Line on the Horizon, in 2009.