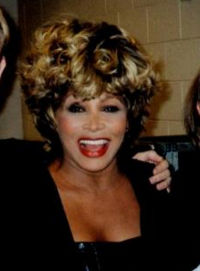 Bullock was born into a life of relative poverty. In segregated 1939 Tennessee, there was little to suggest that she, an African-American female of part Cherokee background, was to become one of the most successful rock music stars in the world. Her personal life was difficult from an early stage, having been abandoned by her mother for some years to be initially raised by her grandmother.

Having moved to St Louis to be reunited with her mother and sister, Anna-Mae became interested in the performances of a singer Ike Turner who performed regularly with his band The Kings of Rhythm.

After being identified by Turner for her unique vocal talents, Bullock became part of his musical revue.

As she assumed an increasingly important musical role within the group, Turner and Bullock were married and Anna-Mae took the stage name Tina Turner, under which she has performed ever since.

Although Turner's solo career is properly seen as beginning with her separating from Ike Turner, there was one notable "solo" recording made by Tina in 1966. "River Deep-Mountain High", although credited to "Ike and Tina Turner", was a collaboration with producer Phil Spector where Ike was not allowed to be involved. The song charted well in Europe, but was not a notable success in the US market.

In 1976, the relationship between Ike and Tina Turner had become unsustainable, largely due to alleged ongoing substance abuse problems by Ike,[1] and Tina left her husband with very little means to survive on her own. The couple later divorced but Tina retained the use of her stage name.

By this time Tina had become a practicing Buddhist—and remains so today. Turner credits her faith with much of the success she has enjoyed since then.

Her career entered an extended hiatus period, where longtime fans of her singing style remained her core audience, along with engagements in her own revue in Las Vegas.

During one performance, Turner became aware of the presence in her audience of Roger Davies—an Australian impresario who was best known at that time for having successfully managed the career of Olivia Newton-John for some years. A meeting was arranged and the two agreed to explore a professional partnership, one that endures to the present day.

People who had been fans of Turner for years had never really abandoned the singer, but the relaunch of her career gathered momentum following a successful showcase performance at 'The Ritz' theater in New York City which highlighted both new material as well as an updated 'rock and roll' image more in keeping with the zeitgeist of pop culture in the 1980s.

In 1984, the Private Dancer album became Turner's most successful release to date. It contained the top ten hits "What's Love Got To Do With It", Turner's first US number one pop single as a solo performer, as well as "Private Dancer" and "Better Be Good To Me". Private Dancer also featured cover versions of Al Green's "Let's Stay Together" and Ann Peebles' "I Can't Stand the Rain".

Her comeback was aided by a starring role as Aunt Entity, a main villain in the 1985 hit film, Mad Max: Beyond the Thunderdome, starring Mel Gibson. The film's title track, "We Don't Need Another Hero", was a worldwide hit.

Tina Turner's life was dramatized in the 1993 film What's Love Got to Do with It, produced by The Walt Disney Company and released through their Touchstone Pictures division. Both Angela Bassett[2] and Laurence Fishburne[3] received Academy Award nominations for their performances, although neither won. Basset was awarded the Golden Globe Award for Best Actress (Musical or Comedy) her portrayal of Tina Turner.

In 2000, at the age of 60, Turner, and her manager Roger Davies, announced that the Twenty-Four Seven tour would be the last large-scale world tour by the artist.

Subsequent work has been sporadically released and promoted primarily by media appearances.

Turner began a tour for the first time in eight years, starting in Kansas City, Missouri, on 1 October 2008.