PD Image
The Dam site is located on the Yangtze River in Hubei province of China. It is about midway between of Hubei's province provincial capital, Wuhan City, and Chongqing City.

The Three Gorges Dam (长江三峡大坝) is a large dam constructed by the Government of China on the Yangtze River near to Yichang City in Hubei Province. The dam is the widest structure of it's kind and the reservoir behind the dam will stretch for 600 kilometre (375 miles). The Yangtze has brought fertility to central China. However, it also has been the cause of frequent and devastating floods. Bringing the Yangtze under control has been a Chinese dream and the main objective of the dame design. Another justification has been making riverine transportation easier on the mid reaches of the river. Where the Yangtze passed through Qutang (瞿塘峡), Wuxia (巫峡) and Xiling (西陵峡) gorges, the river was treacherous with strong currents and dangerous rocks. The plans of the dam were augmented to include several large hydroelectric generators. When completed, they will have a capacity of generating 22.4 million kilowatt of power. 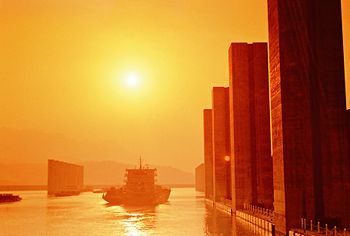 (CC) Photo: Carole Reckinger
A barge navigates between structures of the Three Gorges Dam system.
The project, which was budgeted to cost $25.2 Billion (203.9 Billion RMB), has seen significant objects. The river side population of 1.13 million people had to be relocated as cities, towns, villages and farms were demolished and submerged. New cities have been built above the old ones. Many cultural heritage sites sites have been lost to the rising waters. The Three Gorges was previously a major scenic area in China, and the view appears on the back of the 10RMB bank note. However, much of the drama of the deep gorges and fast moving river currents has been lost. There are additional worries over the effects of the dam on wildlife in the river.

The Chinese plans were that a system of locks would expedite water transport on the river.[1] When full the level of the water in the reservoir would extend all the way to Chongqing. Two sets of five conventional canal locks serve the river's vessels.

In addition to the canal locks, the Three Gorges Dam will be equipped with a ship lift, a kind of elevator for vessels.[4] The ship lift will be capable of lifting ships of up to 3,000 tons.[5][6][7] In the original plan its capacity was to be 10,000 ton vessels.