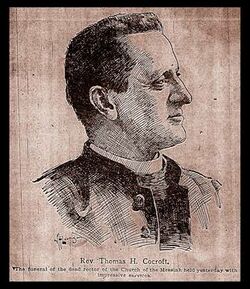 Thomas Henry Cocroft was an Episcopal priest in Providence, Rhode Island in the late nineteenth century. He was the son of William and Elizabeth Cocroft, and was born in East Greenwich, Rhode Island, on September 29th, 1848. He attended Jencks Mowry’s Academy, and finished his studies at Bryant University (then known as Bryant & Stratton’s Business College. He began his career in the Episcopal Church as a Sunday School teacher at the Church of the Messiah in Olneyville (where he himself had once been a student). He then undertook a five-year course of study at the Nashotah Seminary at Nashotah, Wisconsin. He was ordained to the priesthood by Bishop Clark on July 10th, 1876; six days later he married Ellen F. Freeman of Crompton. The Rev. Cocroft was rector at Crompton until 1884, when he became rector of the Church of the Messiah in Olneyville, succeeding the Rev. Delancey Rice, who remained as Rector Emeritus. He worked tirelessly to serve his parishioners, and the parish grew to become one of the largest and strongest in the Providence area. In 1886, he oversaw the building of a new Rectory on Messer Street; in 1889 he laid the cornerstone of a new stone church in the Gothic style in the center of Olneyville, a church which stands to this day, although its parish was recently (2006) combined with the Grace Church parish in Providence, and the Olneyville structure secularized. He also served as the Chaplain to the 1st Rhode Island Light Infantry Regiment.

He was well known for his labors among his parishioners, especially among the poor people of his parish, but his dedication to his duties was so great that it placed an enormous strain on his health. In 1897, he fell ill with what was described as “sciatica and nervous prostration,” and spent some months recovering at a hospital near his summer residence at Sabin’s Point. While there, he came down with diphtheria, which further weakened his condition; although the fever passed, he died of heart failure a week later, on June 4th.