The Nobs was a tongue-in-cheek name used by the rock band Led Zeppelin for their concert tour of Denmark and in particular their performance in Copenhagen, during the band's 1970 European concert tour.

Controversy over using the 'Zeppelin' name originated from Countess Eva von Zeppelin, the grand-daughter of Count Ferdinand von Zeppelin (1838-1917), creator of the German-based Zeppelin Airship company (Luftschiffbau Zeppelin GmbH). By the time Led Zeppelin arrived in Denmark in March 1969, the band were already known after their first groundbreaking tour there in 1968 to fans, the national media, and subsequently Countess von Zeppelin. In 1970, Led Zeppelin guitarist Jimmy Page reflected to journalist Chris Welch of the music newspaper Melody Maker, that Countess von Zeppelin initially took issue during an early Led Zeppelin broadcast concert performance in Gladsaxe on March 17, 1969, when she tried (unsuccessfully) to terminate a planned afternoon television recording by TV Byen, during the band's morning soundcheck and rehearsal.[1] This concert was later broadcast by Danish television on May 19, 1969.[2] 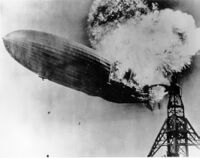 The Zeppelin Hindenburg (LZ-129) ignites in flames on May 6, 1937 over New Jersey. An iconic image later adapted for use on the cover of Led Zeppelin's debut album.

As a gesture of goodwill, the band invited her to meet with them afterwards for tea. The meeting was a cordial one, some of which was captured on a home movie camera by a member of the band's crew. However, upon leaving the studio, her anger reignited when she saw the cover of the group's debut album Led Zeppelin, featuring the Hindenburg (LZ-129) airship combusting into flames, which had only just been released in Europe.[3] Countess von Zeppelin felt the band's use of Zeppelin was dishonouring her family name. As a result, her hostility toward the rock group continued on their next tour of the country in early 1970 by threat of a lawsuit, unless they agreed to change their name whilst working there. While Led Zeppelin's manager Peter Grant was not normally passive when faced with a confrontation, it was decided to appease the aristocrat by temporarily changing the group's name.[4]

One name speculated in the national music press was "Ned Zeppelin", which Page found humorous. After some discussion, Grant and Page settled on the ironically expressive title The Nobs, a playful pun on the name of their European promoter, Claude Nobs.[5] In a deliberate double meaning alluded to by the band, the term also applies to "a person of wealth and high social standing", which was also fitting in this circumstance. 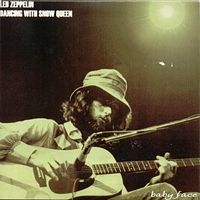 The band were billed as such for their concert at the K.B. Hallen centre in Copenhagen on 28 February, 1970.[6] The frosty reception from Countess von Zeppelin was also the inspiration behind the title of a subsequent double CD bootleg recording of the concert entitled "Dancing with Snow Queen", a play on the Hans Christian Andersen fairytale character.

The cause celebre in Copenhagen was considered advantageous to Led Zeppelin early in their career, as the confrontation gained them free worldwide publicity. The band's choice of names was widely seen as an expression of the group's likability and humorous wit. Countess von Zeppelin never followed through with any threats and did not bother the band again.[7] Grant also toyed with the idea of flying an airship over their next concert at the Montreux Casino, in Switzerland on March 7, 1970 but the band members believed this would be tempting fate, in advertence to the tragic destiny of the Hindenburg.