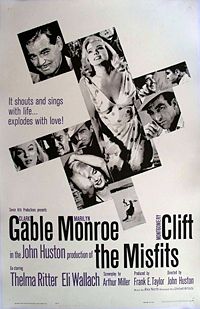 The Misfits is a 1961 American film, written by Arthur Miller, directed by John Huston, and starring Clark Gable, Marilyn Monroe, Montgomery Clift, Eli Wallach, and Thelma Ritter. It turned out to be the final film appearance for both Gable and Monroe. Although it was not a commercial success at the time of its release, it has later garnered critical respect for its manuscript as well as the leading performances. The difficult production process of The Misfits has been widely documented.

The Misfits takes place in Reno. It depicts the chance meeting and unlikely love affair of a depressed divorcée, Roslyn Taber (Monroe), and Gay Langland (Gable), an aging ex-cowboy prone to gambling and surviving on mustang rustling. He sells the horses to slaughterhouses for the manufacture of dog food. Wallach plays Guido, Langland's pilot partner, and Clift plays Perce Howland, a drifter rodeo rider.

The climax takes place during wrangling scenes on a dry Nevada lakebed.

The misfits of the title are both the horses and the humans of the story, unable to find satisfaction in their lives.

The making of The Misfits was troublesome due to several factors, not the least of which were the heat of the northern Nevada desert and the breakdown of Monroe and Miller's marriage.

Director Huston gambled and drank through some nights, and occasionally fell asleep on the set. The production company had to cover for some of his gambling losses. His then-lover Marietta Peabody Tree had an uncredited part. Arthur Miller wrote new pages throughout the shoot, editing and revising the script as the concepts of the film evolved.

Marilyn Monroe was sinking further into alcohol and prescription drugs. Huston shut down production in August 1960 to send Monroe to a hospital for detox. Close-ups after her release were shot using soft focus. Monroe was nearly always late to the set, sometimes not showing up. She spent her nights learning lines with drama coach Paula Strasberg. Monroe's confidante and masseur, Ralph Roberts, was cast as an ambulance attendant in the film's rodeo scene.

Gable insisted on doing his own stunts, including being dragged approximately 400 feet across the dry lakebed at over thirty miles per hour.

In a documentary on the making of The Misfits, Eli Wallach told a story of Huston directing the scene where Wallach was at a bar with Gable. Huston told him that the most intoxicated he himself had ever been was the day before, even though he had seemed sober. The lesson was that an intoxicated person tries to act sober.

Thomas B. Allen was assigned to create drawings of the film as it was made. Magnum photo agency had staff photographers including Inge Morath assigned to document the making of The Misfits.

During production, the lead cast stayed at the Mapes Hotel in Reno. Film locations included the Washoe County Court House on Virginia Street, and nearby Pyramid Lake. The bar scene where Monroe plays paddle ball was filmed in Dayton, Nevada, east of Carson City. Filming was completed on 4 November 1960, and The Misfits was released on 1 February 1961.

Three days after filming ended, Gable suffered a heart attack, and died eleven days later. Monroe and Clift attended the premiere in New York in February 1961, while Monroe was on pass from a psychiatric hospital. Within a year and a half, Monroe died under mysterious circumstances. The Misfits was the last completed film for both Monroe and Gable, her childhood screen idol.

Montgomery Clift, who had been badly injured in an automobile accident in 1956 and had to undergo reconstructive surgery on his face, died four years after the filming. Thelma Ritter died eight years after the movie was made. Eli Wallach went on to a career that extends into the twenty-first century. In all, four of the film's five top-billed actors died that decade, three of them from heart attacks.

Magnum Photos was given exclusive rights to take pictures of the making of the movie. Photographs taken by Inge Morath and Eve Arnold among others, have been on display at various exhibitions around the world. Morath and Arthur Miller were married in 1962 and their union lasted 40 years, until her death in 2002.

Miller's autobiography, Timebends (1987), described the making of the film. The 2001 PBS documentary, Making The Misfits, did the same. Miller's last play, Finishing the Picture (2004), though fiction, was largely based on the events involving the making of The Misfits.

Despite on-set difficulties, Monroe, Clift and Gable delivered performances that are considered superb by modern movie critics.[1] Monroe received the 1961 Golden Globe Award as World Film Favourite in March 1962. Huston was nominated as best director by the Directors Guild of America.

There were high expectations for the film, given the star power of its writer, director, and lead actors. Producer Frank E. Taylor had heralded The Misfits as 'the ultimate motion picture' before its release.

The Misfits was met with mixed reviews and failed to meet expectations at the box office, but it has since developed a cult following. Despite being shot in black and white, the final cost was around four million dollars. It was said to be the most expensive black and white film made to date. Its domestic gross was just under four million. It brought no profits to United Artists.