In Daggerfall, as in all The Elder Scrolls games, players are not required to follow questlines or fill specific character archetypes.

Daggerfall features a spell creation system where, through the Mages Guild, players can create custom spells with several different effects. The game will then automatically generate the mana cost of the spell based on the power of the effects chosen.

Other features include an equipment enchantment system (similar in concept to the spell creation system), the ability to buy houses and ships, a variety of clothing and equipment, dynamic political relationships between kingdoms, the ability to become a vampire, werewolf, or wereboar, and the combat system, which uses mouse movement to determine the direction and effect of weapon swings in melee combat.

The political system is supported by a net of Guilds, orders, and religions, all with unique tasks and quests. Joining and contributing to these facilities allows the player to raise ranks and achieve higher reputation in the game world, which affects how NPCs and other factions view the player.

Daggerfall has genre-typical gore elements and some sexual topics. It displays cartoonish nudity (showing breasts but no genitals) both on NPCs and on the character's paper doll when all equipment is removed. The game installer includes a password-protected childgard feature that hides blood and corpses (instead showing just the skeleton of the corpse), disables sexual topics (though not removing all nudity), and ensures the character portrait is wearing underwear at all times. 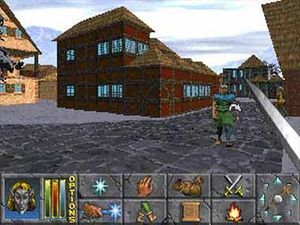 A first-person screenshot from Daggerfall, demonstrating the user interface and graphical capabilities of the game. 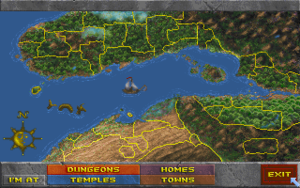 The player can travel almost anywhere on the map, each area with hundreds of visitable locations. 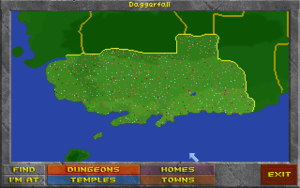 Each dot on the map represents an entire town, city, or dungeon.

Daggerfall, like the other games in the Elder Scrolls series, takes place on the fictional continent of Tamriel. In Daggerfall, the player may travel within the High Rock and Hammerfell provinces of Tamriel. A wide range of formidable enemies, the strongest of which are the Daedra, make the journey through these realms difficult.

Daggerfall is the largest Elder Scrolls game to date, featuring a game world estimated as being 161,600 square kilometres (62,394 square miles or 40,400,000 acres) with over 15,000 towns, cities, villages, and dungeons for the player's character to explore. According to Todd Howard, Elder Scrolls programmer, the game's sequel, The Elder Scrolls III: Morrowind is 0.01% the size of Daggerfall, but it should be noted most of Daggerfall's terrain was randomly generated. Vvardenfell, the explorable part of Morrowind in the third game has 25.9 square kilometres (10 square miles). The Elder Scrolls IV: Oblivion has approximately 41.4 square kilometres (16 square miles) to explore. In Daggerfall, there are 750,000+ non-player characters (NPCs) for the player to interact with, compared to the count of around 1000 NPCs found in Morrowind and Oblivion. The geography and the characters in these later games are much more detailed.

An automap was implemented to help players navigate through the lengthy tombs and ancient underground fortresses. Players have to visit approximately 6-8 areas in order to finish the game, although a total of 47 areas are present. A limited array of building blocks were used to construct the towns and dungeons, causing some reviewers to complain about the game's monotony. In 2002, Morrowind, the third game in the series, responded to this issue with a smaller, more detailed world with unique-looking cities and NPCs with greater individuality.

Daggerfall is a city in the Breton homeland of High Rock. The player is sent here at the personal request of the Emperor. He wants the player to do two things. First, the player must free the ghost of the late King Lysandus from his earthly shackles. Secondly, the player must discover what happened to a letter from the Emperor to a Blades spy in the court of Daggerfall. The letter reveals that Lysandus' mother, Nulfaga, knows the location of the Mantella, the key to resurrecting the first Numidium (a powerful iron golem). The Emperor wants his spy to force Nulfaga into revealing the location of the Mantella so that the Blades can finish the reconstruction of the Numidium. Through a series of mishaps and confusions the letter fell into the hands of an orc by the name of Gortworg. Gortworg, not knowing what the Mantella is, consults Mannimarco, the King of Worms (the leader of the Necromancers). During this time, the Underking who originally destroyed the first Numidium because of its misuse by Tiber Septim, is recuperating deep within a tomb of High Rock, after expending so much energy destroying it the first time. In order for the player to give the Mantella to anyone, the player must kill King Lysandus' murderer and put his ghost to rest. After accomplishing this, stealing the Totem of Tiber Septim from King Gothryd of Daggerfall, and freeing the Mantella from its prison in Aetherius, the power of the Mantella restores the Underking's power.

Since Daggerfall had six very different endings, the writers of the Elder Scrolls series had to be creative when writing the sequel. It is revealed in books in the sequel Morrowind that at the end of Daggerfall, an event known as "The Warp of the West" or "The Miracle of Peace" had occurred, that is, because in order to retrieve the Mantella, the player must enter Aetherius (a spirit realm), a disruption was caused in spacetime, because one of the Gods of Aetherius (Akatosh) is the god of time. Therefore, all of the endings of Daggerfall occurred simultaneously: the PC is slain by the Numidium; the Kingdoms of Daggerfall, Sentinel and Wayrest all consolidate political power in their spheres of influence; the "Bay Kings" and the Imperial forces are defeated by the Orcs, who then create their own kingdom of Orsinium; all of Tamriel is united under the Empire once again; the King of Worms becomes a god; another incarnation of Mannimarco becomes the leader of the Order of the Black Worm; and the Underking, reunited with his heart at last, dies.

Work on The Elder Scrolls II: Daggerfall began immediately after Arena's release in March 1994. The new project saw Ted Peterson assigned the role of Lead Game Designer. Originally titled Mournhold and set in Morrowind, the game was eventually relocated to the provinces of High Rock and Hammerfell, in Tamriel's northwest. Daggerfall saw the replacement of Arena's experience-point based system with one that rewarded the player for actually role-playing their character, and revolved around skills. Alongside skill-set tweaking, Daggerfall came equipped with an improved character generation engine, which included not only Arena's basic class choices, but also a class creation system. The system, which was designed primarily by Peterson, with influences from GURPS, allowed players to create their own classes, assigning their own skills. Peterson notes that he's always enjoyed character creation systems, and that, although he doesn't "like playing Gamma World," even now he'll sometimes "roll the dice and see what kind of mutations my character would develop if I actually wanted to play the game." "I know," he says. "I'm weird." Daggerfall was initially developed with an updated 2.5D Raycast engine, like Doom's, but it was eventually dropped in favor of the XnGine engine. Daggerfall realized a very immense game world, filled with 15,000 towns and a population of 750,000.

Daggerfall saw little influence from other video games of the time. "Computer role-playing games weren't very interesting while we were working on Daggerfall. I can remember playing the latest King's Quest, Doom, and Sam and Max Hit the Road while working on it, but I can't say they had any profound impact on the story or design." The game's most profound influences came from whatever analog games and literature Julian LeFay or Ted Peterson happened to be playing or reading at the time, such as Dumas's The Man in the Iron Mask, which influenced "the quest where the player had to find the missing Prince of Sentinel", and Vampire: The Masquerade, which influenced "the idea of vampire tribes throughout the region". Daggerfall's plot was opened up beyond Arena's clichéd and linear "find the eight missing pieces of the "Staff of Chaos" and use it to rescue the Emperor from a dimensional prison", and "that most cliched of all role-playing conventions, slaying the wicked wizard", to a "complex series of adventures leading to multiple resolutions". Daggerfall was released on August 31 1996, within the game's intended release window, a release again suffering from buggy code. Although Daggerfall's code was, in contrast to Arena's, patchable, the yearning to avoid, in LeFay's words, "all the stupid patches we had for Daggerfall" led to a more cautious release schedule in the future. Ted Peterson left Bethesda following Daggerfall's release, and went to work for a series of companies in Los Angeles and San Francisco: Film Roman, AnyRiver Entertainment, Activision and Savage Entertainment.

On July 9th, 2009, Bethesda made Daggerfall available as a free, legal download on their website, commemorating the 15th anniversary of the Elder Scrolls franchise. 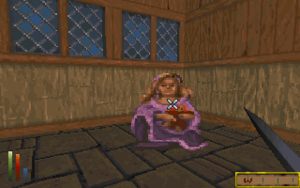 A player finds a quest impossible to complete, potentially due to Daggerfall's various bugs, and is unable to help a possessed little girl.

Daggerfall had numerous software bugs in its initial release, to the point that the game started being called "Buggerfall" by some. The biggest of said bugs was that it was theoretically impossible to complete the main story in the original retail version. Even after numerous patches, including a special patch that adds extra items released by CompUSA, many issues were still left unsolved.

One bug caused players running up stairs to fall through the terrain into a featureless black space. Another infamous topic was that of "the horse and the carriage": a player wanting to enter a town after its gates were closed for a night had to use a levitation spell to fly over the walls or the climbing ability to climb them. In any case the player's horse and carriage (which could be purchased in the game) stayed with the player as if they had been in the player's pocket. Additionally, there was a bug in which, once the player had reached the top of the wall, if the player jumped while running towards any of the battlement-style parapets on top of the relevant wall, it was possible to perform a leap which hurled the player hundreds of feet through the air, invariably killing them upon landing unless they were very well trained in jumping (such as a master acrobat character), or were skilled or lucky enough to land upon a roof, or unless the player knew any spells to slow aerial descents. This jumping bug would occur when the player jumped towards other slanted surfaces, such as roofs.

A crucially plot-critical bug would cause the letter from the "King of Worms to Princess Morgiah of Wayrest" to disappear if the player fast traveled from the Dragontail Mountains to Wayrest. This could be circumvented by traveling the full distance in real-time, a journey that would take several hours, depending on whether or not the player had acquired a horse.

Most of the bugs that could break the Main Quest were fixed/patched. As computers grew faster, other issues arose; work-arounds, such as DOSBox, are available that maintain the game's playability on most modern PCs.