The Texas Railroad Commission, (TRC) founded 1891, is a regulatory agency of the state of Texas and part of the Efficiency Movement of the Progressive Era. It is the most important regulatory agency of any state, primarily because it controls oil and gas production in Texas, as well as sets in-state rates for trucks, buses, and railroads. From the 1930s to the 1960s it largely set world oil prices, but was displaced by OPEC (Organization of Petroleum Exporting Countries) after 1973. In 1984 the federal government took over transportation regulation, but the Railroad Commission kept its name. With an annual budget of $79 million it now focuses entirely on the regulation of the oil, natural gas, mining, and pipeline industriess, setting allocations.

Attempts to establish a railroad commission in Texas began in 1876. After five legislative failures, an amendment to the state constitution providing for a railroad commission was submitted to voters in 1890. The amendment's ratification and the 1890 election of Governor James S. Hogg, a liberal Democrat, permitted the legislature in 1891 to create the Railroad Commission,' giving it jurisdiction over operations of railroads, terminals, wharves, and express companies. It could set rates, issue rules on how to classify freight, require adequate railroad reports, and prohibit and punish discrimination and extortion by corporations. George Clark, running as an independent "Jeffersonian Democratic" candidate for governor in 1892, denounced the TRX as, "Wrong in principle, undemocratic, and unrepublican. Commissions do no good. They do harm. Their only function is to harass. I regard it as essentially foolish and essentially vicious."[1] Clark lost the 1892 election to Hogg but a federal judge ruled the TRC illegal; the judge in turn was overruled by the U.S. Supreme Court. The governor appointed the first members but in 1894 it became elective, with three commissioners serving six-year, overlapping terms. The TRC did not have jurisdiction over interstate rates, but Texas was so large that the in-state traffic it regulated was of dominant importance. 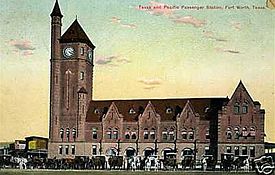 Senator John H. Reagan (1818-1905), the first head of the TRC (1891-1903), had been the most outspoken advocate in Congress of bills to regulate railroads in the 1880s. He feared the corruption caused by railroad monopolies and considered their control a moral challenge. His advocacy of legislation was based on an emotional response to real and imaginary evils. However as chairman of the TRC, he changed his views when he became acquainted with the realities of the complex forces affecting railroad management. Reagan turned to the Efficiency Movement for ideas, establishing a pattern of regulatory practice that TRC used for decades. He believed that the agency should pursue two main goals: to protect consumers from unfair railway practices and excessive rates, and to support the state's overall economic growth. To find the optimal rates that met these goals he focused the TRC on the collection of data, direct negotiation with railway executives, and compromises with the parties involved. The agency did not have the legal authority to set rates, nor did it have the resources to spend much of its time in court battles. The carrot was far more important than the stick. Freight rates continued to decline dramatically. In 1891, a typical rate was 1.403 cents per ton mile. By 1907 the rate was 1.039 cents – a decline of 25%. However the railroads did not have rates high enough for them to upgrade their equipment and lower costs in the face of competition from pipelines, cars and trucks, and the Texas railway system began a slow decline.[2] 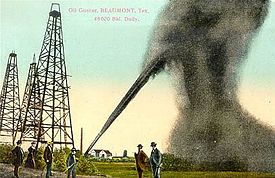 A crisis for the petroleum industry was created by the East Texas oil boom of the 1930s, as prices plunged to 25 cents a barrel. The traditional TRC policy of negotiating compromises failed; the governor was forced to call in the state militia to. Texas oilmen decided they preferred state to federal regulation, and wanted the TRC to give out quotas so that every producer would get higher prices and profits. Pure Oil Company opposed the first statewide oil prorationing order, which was issued by the TRC in August 1930. The order, which was intended to conserve oil resources by limiting the number of barrels drilled per day, was seen by small producers like Pure as a conspiracy between government and major companies to drive them out of business and foster monopoly in the oil industry. Ernest Thompson (1892-1966), head of the TRC from 1932 to 1965, took charge of the agency and indeed the oil industry by appealing to a mythic ideal of Texas's role in the global oil order--the civil religion of Texas oil. He cajoled, harangued, and browbeat recalcitrant producers into compliance with the TRC's prorationing orders. The New Deal allowed the TRC to set national oil policy. As late as the 1950s the TRC controlled over 40% of United States crude production and approximately half of estimated national proved reserves.

Regulation was a practical rather than ideological affair. The TRC typically worked with the regulated industries to improve operations, share best practices, and address consumer complaints. Radical activities like rate setting to favor shippers or producers or consumers, and heated court battles, were the exception rather than the rule. It took into account production in other states, in effect bringing total available supply, (including imports, which were small) within the principle of prorationing to market demand. Estimated market demand less these uncontrolled additions to supply gave the Texas total which was to be prorated among fields and wells in a manner calculated to preserve equity among producers and to prevent any well from producing beyond its Maximum Efficient Rate (MER). Scheduled allowables are expressed in numbers of calendar days of permitted production per month at MER.[3]

From the 1890s through the 1960s, the Texas Railroad Commission found it difficult to enforce fully Jim Crow segregation legislation. Because of the expense involved, Texas railroads often allowed wealthier African Americans to mix with whites, rather than provide separate cars, dining facilities, and even depots. In addition, West Texas authorities often refused to enforce Jim Crow laws because few African Americans resided there. In the 1940's, the railroad commission's enforcement of segregation laws began collapsing further, in part because of the great number of African American soldiers that were transported during World War II. The trains were integrated in the early 1960s.[4]