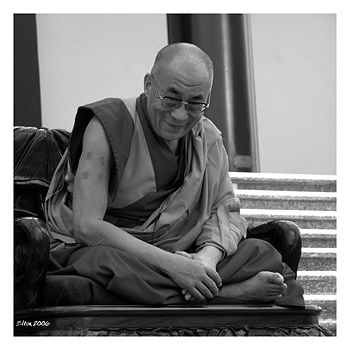 Jamphel Ngawang Lobsang Yeshe Tenzin Gyatso, born Llhamo Döndrub, is the 14th Dalai Lama of the Gelug school of Tibetan Buddhism. He is currently the leader of the Tibetan government in exile, and is a Nobel Peace Prize Laureate.

Llhamo Döndrub[1] was born on a straw covered dirt floor on July 6, 1935[2] to Choekyong and Diki Tsering, relatively wealthy farmers of the village of Takster in the Amdo region of Qinghai province, China. His parents, and all the other village inhabitants of 20 families, made a precarious living growing barley, buckwheat and potatoes. His parents had 16 children, of which he was the fifth eldest of seven who survived childhood. His elder brother, Thupten Jigme Norbu, was recognised as the re-incarnation of the High Lama, Takster Rinpoche. His eldest sister, Tsering Dolma, would later depict their mother in the film Seven years in Tibet. His other brothers and sisters are Gyalo Thondup, Lobsang Samten, Jetsun Pema, and Tendzin Choegyal.

Tenzin Gyatso has been awarded many times throughout his life, for his spiritual and political work. On December 10, 1989, he was awarded the Nobel Peace Prize. On 22 June 2006 he became one of only four people ever to be recognized with an Honorary Citizenship by the Canadian House of Commons. On October 17, 2007, he was awarded the U.S. Congressional Gold Medal, the highest award in the United States of America.