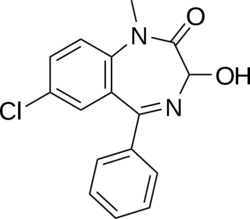 Temazepam (marketed under brand names Restoril, Euhypnos, Normison, Remestan, Tenox and Norkotral) is a powerful short to intermediate-acting sedative-hypnotic benzodiazepine drug of the 3-hydroxy category. Therapeutic and supratherapeutic doses of the drug can manifest clinical effects of strong hypnosis, sedation, amnesia, and ataxia. In addition, temazepam has effective anxiolytic (anti-anxiety), anticonvulsant, and skeletal muscle relaxant properties. After an oral dose of temazepam, absorption occurs rapidly to induce sleep and preserve sleep architecture. It is generally prescribed for the treatment of short-term severe or debilitating insomnia in patients who have difficulty falling asleep or maintaining sleep.[1][2][3]

Temazepam was first synthesized in 1964 but did not come into use as an hypnotic until 1969.[4] In the United States it was not approved for the treatment of insomnia by the Food and Drug Administration until 1981 when it came out under the brand name Restoril. It quickly gained popularity as an effective sleeping pill but with the rise in prescriptions also came the rise in abuse of the drug and addiction became rampant, particularly in Europe and Australia.

Temazepam is classed as a 1,4 benzodiazepine, with the chemical name 7-chloro-1,3-dihydro-3-hydroxy-1-methyl-5-phenyl-2H-1-4-benzodiazepin-2-one. It is a white, crystalline substance, is very slightly soluble in water and sparingly soluble in alcohol. The main pharmacological action of temazepam is the enhancement of the neurotransmitter, GABA at the GABAA receptor. Modulation of the α1 is associated with sedation, motor-impairment, anxiolysis, amnesia, muscle relaxation, anticonvulsant effects, ataxia, and reinforcing behavior.[5] It is a full agonist of the benzodiazepine receptor and its half-life is 8-22 hours.

Oral administration of 15 to 45 mg temazepam in man resulted in rapid absorption with significant blood levels achieved in less than 30 minutes and peak levels at 2 to 3 hours. In a single and multiple dose absorption, distribution, metabolism, and excretion (ADME) study, using tritium (3H) labelled drug, temazepam was well absorbed and found to have minimal (8%) first pass metabolism. There were no active metabolites formed and the only significant metabolite present in blood was the O-conjugate. The unchanged drug was 96% bound to plasma proteins. The blood level decline of the parent drug was biphasic with the short half-life ranging from 0.4-0.6 hours and the terminal half-life from 3.5-18.4 hours (mean 8.8 hours), depending on the study population and method of determination.[6] Metabolites were formed with a half-life of 10 hours and excreted with a half-life of approximately 2 hours. Thus, formation of the major metabolite is the rate limiting step in the biodisposition of temazepam. There is no accumulation of metabolites. A dose-proportional relationship has been established for the area under the plasma concentration/time curve over the 15-30 mg dose range.

In a 7 day study, in which subjects were given a 30 mg temazepam capsule 1 hour before retiring, steady-state (as measured by the attainment of maximal trough concentrations) was achieved by the third dose. Mean plasma levels of temazepam (for days 2-7) were 260±210 ng/mL at 9 hours and 75±80 ng/mL at 24 hours after dosing. A slight trend toward declining 24 hour plasma levels was seen after day 4 in the study, however, the 24 hour plasma levels were quite variable. At a dose of 30 mg once-a-day for 8 weeks, no evidence of enzyme induction was found in man.