Telephone Number Mapping (ENUM or Enum, from TElephone NUmber Mapping) is a suite of protocols to unify the telephone numbering system E.164 with the Internet addressing system DNS by using an indirect lookup method, using the Enum telephone number as a key to obtain NAPTR records. The records are stored at a DNS database.

Although it facilitates calling VOIP users from IP and PSTN networks, ENUM is not a VOIP function and should not be confused with common VOIP routing based on SIP and H.323 protocols with a Uniform Resource Identifier (URI).

Being able to dial telephone calls the way customers have come to expect is considered crucial for the convergence of classic telephone service (PSTN) and Internet telephony (VOIP), and for the development of new IP multimedia services. The problem of a single universal personal identifier for multiple communication services can be solved with different approaches. One simple approach is the Electronic Number Mapping System ENUM (also known as Telephone Number Mapping), deve­lop­­ed by the IETF, using existing E.164 telephone numbers, protocols and infrastructure to indirectly access different services available under a single personal identifier. ENUM also permits communica­ting the IP world to the telephone system in a seamless manner.

One potential source of confusion, when talking about ENUM, is the variety of ENUM implementations in place today. Quite often, people speaking of ENUM are really referring to only one of the following:

An ENUM subscriber to be able to activate and use the ENUM service needs to obtain three elements from a Registrar:

Calling by using a new personal E.164 number (the ENUM number) to look-up at a database is therefore an indirect calling support service.

The URI can then be used to look up at the DNS the Internet addresses for services such as SIP VOIP telephony. NAPTR records are used to set the subscriber call forwarding/termination preferences. Therefore the whole system can 'translate' E.164 addresses to SIP addresses. An example NAPTR record is:

This means the holder of number +1 555 4242 can be called via SIP at phoneme@example.net and via email at myemail@example.com

The following Figure illustrates how ENUM works by giving an example: Subscriber A sets out to call Subscriber B.

Application scenario for Voice over IP (VOIP) with ENUM.

The ENUM user does not notice anything of this reversal and the DNS database look-up, as this is done automatically behind the scene using a user agent software in his PC or terminal, or at the PABX or Gateway. For instance, when the user types the telephone number in his web browser ENUM enabled agent and indicates what item of information he is looking for (email address, telephone number, web address, etc.) in the PC or terminal the number is converted to a domain name. This is sent to ENUM servers on the Internet, which send back the NAPTR records associated with the name. The access information and any priority indicated for them are stored in these. The user gets the requested address back on his PC or terminal. ENUM therefore in fact functions as a mechanism for translating a telephone number into a domain name with the requested address or number associated with it, but without the user viewing how this is done, just as he is currently unaware that he is using the DNS when he makes a connection with the Internet or what is going on at the telephone switch when he makes a call.

One way of doing call forwarding with ENUM is illustrated in the next figure. The caller uses the telephone to dial the number of another subscriber, which leads to an ENUM lookup. The DNS responds to the caller by returning a list with NAPTR records for VOIP communication, telephone numbers and email addresses. Next, an attempt will be made, using the VOIP record from this list, to establish a connection with the subscriber. If the subscriber is not online, the next record selected will be that for a connection to a PSTN or mobile telephone. If this attempt fails too, a voice message will be sent to the subscriber via a listed email address. 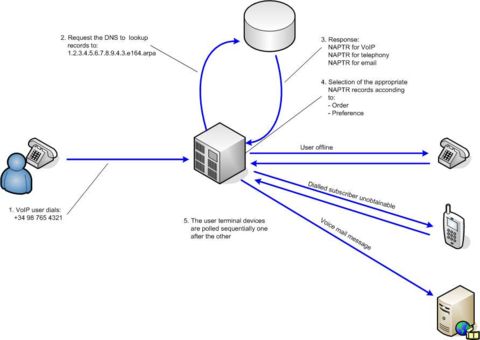 ITU e164.arpa subdomains are first delegated to ("registered by") regulatory bodies designated by the national government of the country code concerned, which further delegates zones to telecommunications providers. Your telephone company is therefore in charge of the NAPTR records, usually. Some countries are proposing to let end-users register their own telephone numbers via an intermediary, which need not be their own telco. This is considered a good idea as VOIP is a major Enum use. People who use an Enum-enabled VOIP service can dial your existing number and be connected not to your existing phone line, but to your own VOIP telephone directly via the Internet, bypassing the telephone system entirely. When they call someone who does not use Enum, calls complete over the Public Switched Telephone Network or PSTN.

Alternative free public and private ENUM services such as E164.org and VPF ENUM Registry have also emerged. These services use PSTN numbers to look-up termination URIs via private NAPTR records and can be used in addition to e164.arpa. Also other ENUM lookup protocols such as sbXML are also available. These services claim to provide a faster and easier mechanism to translate E.164 numbers into SIP addresses.

ENUM can also be viewed as a called party facility. Basically, it is an indirect dialling service designed to work seamlessly on PSTN and VOIP that builds on the great value of the e.164 numbers: billions of people knowing how to dial using numbers.

If the called person has opted to use ENUM she/he will have published the ENUM number and have entered (via ENUM NAPTR) his/her wishes for how the call should be terminated. This might be a single VOIP identifier, but most likely it will be a list of how the call should be forwarded to various fixed-line, cellphones, secretarial or voice mail services, either at the IP or at the PSTN side of the network. It is the called party choice to opt-in ENUM and also to decide to let the calling party know her/his wishes.

Today when a user places a regular phone call, he has to begin deciding how to establish the call with the other party: via VOIP, Fixed-line PSTN, cellphone… entering a URI or dialling a number. With ENUM indirect dialling it is the called party wishes that matter and solve that decision. Another benefit of indirect dialling is to free the user to change his phone telco, webpage, IMS, email or whatever telecom service he uses without having to tell all his contacts about that.

A presence enhanced ENUM facility having various profiles could automatically change the called party wishes as a function of where he/she is available. This could be a mechanism to automatically switch between cellphone and VOIP to the most convenient (or the less costing) termination.

Parties having a direct interest in ENUM

Various parties are involved with ENUM. These include:

The registrar
The registrar is the party who manages the registrant’s access information and ensures that it is publicly available on the Internet.

The government or the regulator
Usually a governmental entity or a regulatory authority has control over the National zone of ENUM and will play a role in the appointment of the registry.