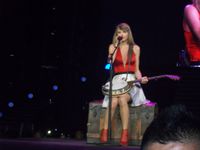 Taylor Alison Swift (born December 13, 1989) is an American pop and country music singer-songwriter, as well as an occasional actress and cover model. After releasing her eponymous album in 2006 which was certified multi-platinum by the Recording Industry Association of America, she has become an internationally popular figure. Born in Reading, Pennsylvania, and raised in Wyomissing, Swift moved to Nashville, Tennessee, at the age of fourteen to achieve stardom and found it after being signed on by then fledgling independent label Big Machine Records.

In November 2008, Swift released her second album, Fearless, and the recording earned Swift four Grammy Awards, including the Album of the Year; it also topped the Billboard 200 for 11 non-consecutive weeks. The accompanying tour, the Fearless Tour, which was Swift's first headlining tour, was vastly successful and was the subject of the documentary Journey to Fearless which was aired on the Hub Network. In addition, a Platinum Edition of Fearless was released, and featured additional content. Her third album, Speak Now, which sold 1,047,000 copies in its first week. she has sold over 20 million albums and 34.3 million singles worldwide. In October 2012, Red, Swift's fourth album was released to critical and commercial claim, and the accompanying Red Tour was highly successful worldwide in over twenty countries.

Swift was born on December 13, 1989, in Reading, Pennsylvania, and raised in Wyomissing, Pennsylvania. She is the daughter of Andrea Gardner (née Finlay), a homemaker, and Scott Kingsley Swift, a stockbroker. Swift has a younger brother named Scott. The family was raised on a Christmas tree farm.

Swift started her interest in writing when she won a national poem contest in fourth grade with the poem "Monsters in My Closet". At the age of ten, a computer repairman showed her how to play chords on the guitar, sparking her interest in learning how to play the instrument. After that, she wrote her first song, "Lucky You." At the age of twelve, Swift wrote a 350-page novel during one summer that remains unpublished. She was a victim of bullying, and wrote songs to cope with it.

She began to visit, and at the age of fourteen moved to, Nashville. She played her first major show at Bloomsberg Fair and played at local karaoke contests. She attended Hendersonville High School, though she was homeschooled her junior and senior years, and received her diploma in 2008.

Swift made her first trip to Nashville where she hoped to get a record deal with demo tapes from her karaoke performances, but was rejected. She was asked to recite the national anthem upon coming back to Pennsylvania, and it received much national attention. When she was fifteen, she rejected RCA since they wanted to keep her on an artist development deal. She attracted the attention of Scott Borchetta who signed on his newly formed Big Machine Records.

In 2006, she released her debut single "Tim McGraw," reaching No.6 on Billboard magazine's Hot Country Songs chart. Her self-titled debut album was later released on October 24, 2006. The album sold 39,000 copies in its first week, spent eight weeks on the Top Country Albums, and peaked at No. 1 on Billboard Top Country Albums.

Swift's second studio album, Fearless, was released in the United States on November 11, 2008. The album debuted at No.1 on the Billboard 200 Album Chart. The lead single "Love Story" was a hit on both the pop and country charts. It is also the bestselling country album digitally, selling over 338,467 copies in eight weeks. In January 2009, Swift announced her North American Fearless Tour planned for 52 cities in 38 states and provinces in the US and Canada over the span of 6 months.