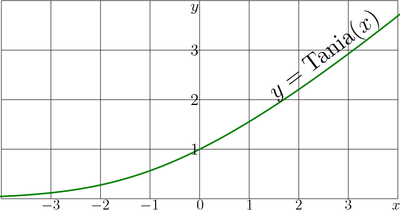 Relation with other special functions 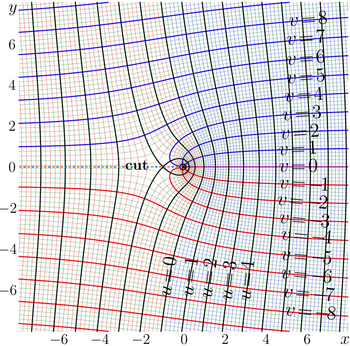 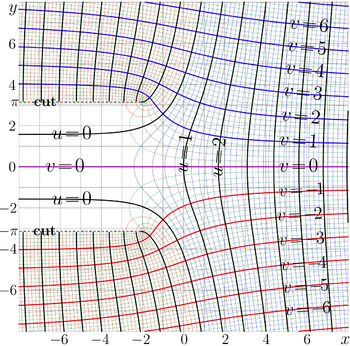 The inverse function of Tania can be called "ArcTania"; ArcTania = Tania−1. The ArcTania is an elementary function:

In certain range of values of the argument, the Tania function can be expressed through the Lambert W-function (known also as the ProductLog function) as follows:

After to use, implement and describe the Tania function, it was revealed, that very similar function, WrightOmega is already described [2]:

The Tania function is used in the Laser science for the description of intensity of light in the idealized gain medium.

The Tania function appears as the intensity of a wave in the uniformly pumped gain medium, measured in unit of the saturation intensity. Then, its argument has sense of length of propagation, measured in units of the inverse of unsaturated gain. Such a model describes the idealized laser amplifier with simple kinetics, and can be applied, for example, to the Yb-doped ceramics pumped in vicinity of wavelength of order of 940nm; the maximum gain corresponds to wavelength in vicinity of 1030 nm. For this wavelength, the saturation intensity may have value of order of

, and the unsaturated gain (that depends on the concentration of dopant and the intensity of pump) may be of order of

.[3] This determines the orders of magnitude of values of the physical parameters, while the intensity along the propagation at distance

can be described with intensity

is distance at which the intensity saturates the gain, id est,

The phenomenology of waves with such a saturated gain has been considered in century 20; some results are published in the Soviet Journal of Quantum Electronics.[4][5]

The function "Tania" is named after the short name of T.I. Kuznetsova.[5]

Properties of Tania and ArcTania

. In the figure, these lines are marked with dashed half-lines. The branch points are determined by the singularity of the expression in the right hand side of equation (1), they correspond to values of ArcTania equal to

. Using (3), these points can be expressed as follows:

In the left hand side of the figure, between the cut lines lines, the function exponentially approaches zero. In other directions, the modulus of the function is smoothly growing; the growth is similar to that of the linear function.

The expansions of Tania in diffrent cases, and, in particular, at the branchpoints

Expansion of Tania at infinity

The complex maps of Tania and ArcTania above show that asymptotically each of these functions becomes similar to its argument. Being far from the branch points (and outside the cut lines), the grid of the lines of constant real and constant imaginary part looks similar to that of the identity function. This indicates that the leading term of the expansion at infinity of

. Such an expansion is suggested in this section.

At large values of the argument, Tania shows almost linear growth and can be expanded as follows:

, the truncated series (7) can be used for the evaluation of

, while the argument is not between the cut lines in figure. For the evaluation, the asymptotic can be written also as follows:

Asymptotic expansion of Tania between the cut lines

The expansions (11) and (12) are not valid between the cut lines. For this range, for large values of the argument, the special expansion is suggested in this section.

Such expansion can be obtained iterating assignment

with the initial approach

Together with the expansion (11), the expansion (13) covers the most of the complex plane, leaving only a finite-size domain that includes the branch points and the origin of the coordinates. The expansion at these points are considered below.

Expansion of Tania at singularities

has two cut lines at

For the expansion of

at the upper branch point

, the convenient small parameter is

then, the expansion of Tania can be written as follows:

The Mathematica Series routine easy calculates some tens of the first coefficients of the expansion. The series seems to converge while

; in vicinity of another branch point, id est, at

, such an approximation is not valid.

Similar expansion of Tania at point

can be obtained by complex conjugation of expressions (9) and (10).

The expansions above, in principle, allow to cover all the complex plane with the approximations of the Tania function. But the expansion at the branch points may be not convenient while dealing with Tania of a real argument. For this case, the Taylor expansions of Tania at the real axis are suggested in this section.

The Taylor expansion of Tania at zero

; this series can be obtained with the Mathematica's operator InverseSeries, converting the expansion

, the exansion (11) can be used for the efficient (quick and precise) evaluation of

; in order to get 14 significant decimal digits, it is sufficient to take 20 terms.

In the similar way, the expansion of

can be written as follows:

The series converges at

The truncated expansions above cover all the complex plane with at least 3–digit approximations.

The series above can be used for the evaluation of

, dependently on value of

. The increase of the precision of the evaluation is easier to achieve not with the increase of number of terms in the expansion, but applying the Newton method. Let

be initial approximation, obtained with the appropriate formulas from the set above; let

is derivative of the ArcTania function by equation (3). The primary approximations considered in the previous sections allow to get good initial approximation for any point of the complex plane; then the sequence

converges faster than exponentially. Practically, of order of 5 terms in some of the primary approximations are sufficient, and then the third iteration

with 15 decimal digits. Few tens operations are sufficient to get the maximal precision available with the complex(double) variables; the graphics can be plotted in the real time with the C++ generators supplied. (Click the figure to see the implementation.)

Some of the content in this article previously has appeared on the TORI (Tools for Outstanding Research and Investigation) wiki as Tania function. In 2013 February-March, TORI had been attacked and moved from http://tori.ils.uec.ac.jp/TORI to http://mizugadro.mydns.jp/t