This is a great article. I thought we might want to have some period illustrations -- ration books (I have my wife's grandfather's), posters, or wartime propaganda aimed at the home front. Here is one example which might be great to have: 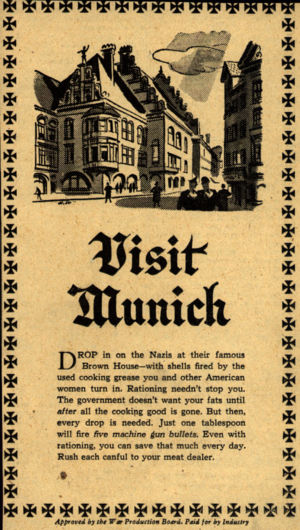 There are a few others like this -- including one, rather disturbing, hailing grease as "rat poison" against the Japanese "rat" -- at the Ad Access site at Duke University.Russell Potter 22:13, 5 June 2007 (CDT)

I agree that posters are great. See D'Ann Campbell's [my spouse!] powerpoint lecture using WW2 posters at [1] CZ is college level and we can and should handle strong stuff--as Dower points out re ww2 in pacific, US and Japan both used nasty images. Richard Jensen 23:22, 5 June 2007 (CDT)

Richard, thanks for the link to the Powerpoint -- most impressive! My personal favorite was "You Can't Ration Love". There's a rich array of material to choose from, enough to support this and other future entries on this era, and all the goverment-produced stuff is, I believe, copyright-free! Russell Potter 07:08, 6 June 2007 (CDT)

The title issues: commas, and what to call the war, remain.

With a first reading, I wonder if the order is correct. Aren't the population attitudes, and indeed the means of influencing them, more important than the economic models? In the society being examined, voluntary cooperation would need to be in place before the rationing would be supported. Howard C. Berkowitz 17:19, 21 June 2010 (UTC)

I suppose there would be articles on the homefronts during World War Two in all the nations. "Homefront" is probably an artificial creation anyway. What the article is really about the social history of the U.S. during World War Two. I've no solutions. I'd love to hear suggestions. Russell D. Jones 18:07, 21 June 2010 (UTC)

Good refinement. Actually, I might say the social history is its own topic, while issues such as economic/industrial mobilization are matters for separate articles. Consider, for example, the social history of the Philippines, or, indeed, most occupied nations. They didn't fight an industrial war, but they did have a strong guerrilla movement (about which I'll write one of these days). Social factors would play a major part in defining the effectiveness of resistance. Social factors in the western Soviet Union dictated their initial reaction to the Germans; if they hadn't been there, there would have been no Vlasov. Social factors played a part in the way Quisling has become an epithet, and the complexity of coexisting Vichy and Resistance.

Now, is your preference World War Two? I really don't care that much, as long as we standardize -- I just don't like Roman numerals in names. I have a very slight preference for Second World War, but I'll go along with anything reasonable. Reasonable does not count renumbering to consider the Napoleonic Wars, etc.

There's a possibly apocryphal airline story that might relate to homefront, or something else. An American pilot was asking directions to the disembarkation gate at Frankfurt, and the air traffic controller became annoyed at his questions. "Have you never been to Frankfurt before?"