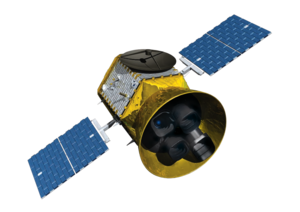 Astronomers used the orbiting TESS telescope to determine TIC 168789840 was lined up so all six star's eclipses could be observed.

TIC 168789840 is a stellar system with six stars.[1][2] Three pairs of binary stars circle a common barycenter. The New York Times noted that, while other systems with six pairs of stars had been discovered, this was the first system where the stars can be observed eclipsing one another, as their plane of rotation pointed towards the earth.

Orbital telescope Transiting Exoplanet Survey Satellite identified that the star system consisted of six eclipsing stars.[3] The discovery was announced in January 2021. It is approximately 1900 lightyears from Earth, in the constellation Eridanus.

Two of the pairs of binaries were close binaries, while the orbit of the third pair of binary stars took 2,000 years to orbit the barycenter.[1][4][5]

According to Jeanette Kazmierczak of NASA's Goddard Space Flight Center[6]:

All primary stars of all three binaries are slightly brighter than Sol, Earth's sun, while the secondary stars are all about one third dimmer.[3] Because the two closely bound pairs are so close only the third, more distant pair could have planets.[1]