It is hard to say if swimming is an instinct; human beings develop for nine months while living in amniotic fluid and while we are babies, the "swimming movement" happens by reflex when we are in a non-static free form environment (such as being held up in the air, or when being bathed). This motion usually starts two weeks and lasts around five months post-birth.

The athletic merits of swimming are great; the mass of water provides an element of resistance with every stroke, providing a cardiovascular workout.

There are different types of repetitive motions, known as strokes, that can be used to swim: the backstroke; the breaststroke; the butterfly; the side-stroke, and "freestyle". 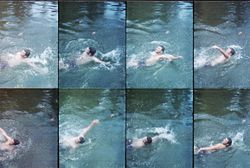 © Photo: Allison Fang
A sequence collection of a man performing the backstroke.

The backstroke is performed while floating in the water on one's back. The legs alternate in kicking motions providing propulsion while the arms rotate about the shoulder. The arm stroke is performed in such a way that the greatest amount of momentum provided in the water occurs when the arm breaks the surface when raised straight up, over the top of the head with the palm facing outward (9 o'clock) to a position where the arm "pulls" the swimmer along under the surface of the water at a perpendicular (6 o'clock) with the palm facing up, acting as a paddle. The stroke is continued as the arm is brought up to the surface, palm upward (3 o'clock) and completed as the arm is raised to another perpendicular (12 o'clock) ready for the next iterative stroke. Each arm performs this movement; the other arm beginning the stroke when the first arm breaks the surface of the water over the top of the head, providing a continuous movement.

Throughout the entire stroke, the head and body remain in a line approximately parallel with the surface of the water. 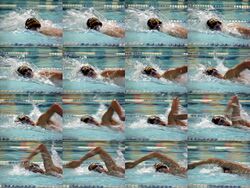 (CC) Photo: Robert Rhinesmith
A side view of a swimmer performing the "freestyle" stroke.

Freestyle is a stroke performed while floating face-down in the water. The legs alternate in kicking motion, while the arms alternate "reaching out" to pull the swimmer forward. The majority of the thrust occurs when the outstretched arm breaks the plane of the water, and with arm fully extended is moved from a 9 o'clock position to a 3 o'clock; similar to that of a boat oar. On the side of whichever arm is due for the next stroke, the swimmer turns his head to that opening and takes in a deep breath. As the hand reaches forward, the head returns face-down in the water and the cycle repeats on the opposite side. Again, like the backstroke, the head and torso should remain in a line approximately parallel with the surface of the water, except during the breathe cycle. 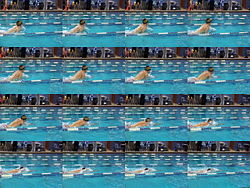 Breaststroke is a symmetrical swim stroke. It begins with both hands pressed together directly in front of the breast area of the chest, forcing the elbows off to the side outwards. The knees are also drawn in halfway to the abdomen. The very next motion is the pushing of the hands directly out in front of the swimmer, still placed together, extending the swimmer's position into a straight line. At this moment, the knees and legs begin to come down and separate to either side. The swimmer's face will begin to come down into the water. Once the arms are fully extended, they part ways with hands facing away from each other. Arms kept stiff, both arms are swung out in tandem until they are perpendicular with the body; the legs providing a powerful "kick" and ending up back together behind the swimmer. At this point the swimmer's face will return to above the surface of the water due to the bodily motions. To repeat, the hands are redrawn inward to the breast-area of the chest; the knees are brought in, and the cycle repeats. Note that the breath should occur when the swimmer's head is pushed up out of the water and the arms are perpendicular to the body.

Butterfly is symmetrical and swum on the breast just like the breaststroke. The stroke begins with the hands stretched out and together. Both arms pull back together under the breast, frequently in a key hole pattern towards the hips. They then recover above the water simultaneously. Hands must remain at a horizontal level. The kick requires that both legs and feet move up and down vertically at the same time. The kick occurs twice during the arm pull, once at the beginning of the underwater pull and the second time just before the arms come out of the water. It is commonly called a dolphin kick because the lower half of the body moves up and down similar to a dolphin swimming. To finish a race, the swimmer must contact the end of the pool with both hands simultaneously though not necessarily horizontally.

There are a few different categories for competitive swimming. Competitive swimming can begin for children as young as 6 years old. Swimmers also compete well into their later years in Master's competitions. The most common competitions are judged in various yard or meter-length categories; the amount of times actually traversed from one end of the pool to the other depends on its length and the distance of that "event". Swimming races are held in the summer Olympics.

Additionally, there are so called "iron-man" competitions where the distances are much greater. There are records for individuals that have swam such bodies of water as the English Channel.

Competitive swimming at world level is regulated by FINA[1] and consists of races in a man-made pool of either 50 meters or 25 meters in length. In the USA many swimming competitions are contested in pools that are 25 yards long.

It is not uncommon for either owners of houses equipped with pools or local community pools to host "pool parties", in which participants are encouraged to show up with appropriate swimming attire and various pool toys, such as dive rings, air cushions, foam noodles and inner tubes.

An unusual form of recreation comes from swimmers that choose to swim during the winter. These are known as "Polar Bear Clubs". One such organization, the Coney Island Polar Bear Club[2] is the oldest winter bathing organization in the United States. During their gatherings, the temperature in the Atlantic Ocean can drop into the low 60 degrees Fahrenheit, with not-unusual lows of 30 degrees given local climate change and wind chill.