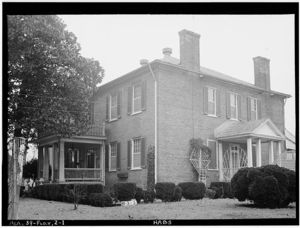 Sweetwater Mansion, located in Florence, Alabama, is a plantation house designed by General John Brahan of the Alabama Militia. A veteran of the War of 1812, Brahan owned over 4,000 acres in eastern Lauderdale County, Alabama. The eight-room home was built of bricks manufactured on the site of Sweetwater creek that lay just below the house. Sweetwater Mansion received its name from the creek and was first occupied by Brahan's son-in-law Robert M. Patton, a post-Civil War governor of Alabama, who completed the mansion in 1835. Sweetwater is listed on the United States National Registry of Historic Places.[1] [2]

Sweetwater Mansion was built on a hill facing an early stage road that connected Pulaski, Tennessee to Florence, Alabama as Florence had a river port. Slaves were used to construct the home starting with the excavation of the basement in 1828. Brahan never saw his plantation home fully constructed as he died when the walls were at the height of the windowsills. Brahan was buried north of his unfinished home.

Patton inherited the mansion after Major Robert Brahan, the son of General John Brahan, sold Sweetwater to Patton as Major Brahan's wife did not want to live out in the country.

Once Patton purchased the mansion, he built Sweetwater following his deceased father-in-law's specification, including the construction of four large rooms divided by a central hall. Slaves were responsible for maintaining the wood floors so they looked like white marble.

The upstairs rooms included two bedrooms and a guest room.

The basement contained five rooms each with fireplace. Inside the basement there was a wine cellar, preserving room, pantry and laundry room. There is also a mystery room. The mystery room does not have an entrance and the only way the room can be seen is through an exterior window.

Outbuildings at Sweetwater included a kitchen, weaving-room and icehouse.

Sweetwater was one of the largest Southern plantations as its size was 3,800 acres in 1860. The plantation had a slave village of 23 cabins.[3]

There is a family cemetery onsite. An unmarked slave cemetery is located at the plantation.

General William Tecumseh Sherman's 15 United States Army Corps soldiers camped overnight at Sweetwater on November 3, 1863. While located at the plantation, the soldiers decided to search for food and other war campaign booty.

Soldiers then entered the Sweetwater home, but were unable to enter the stairway as Edmund Patton; a family slave, guarded the stairs. "My two young mistresses are upstairs and you can not go there unless over my body," said Edmund Patton to the soldiers.

During the incident Mrs. Patton tried to flee the soldiers but was pinned down and searched before she handed over her wallet containing $40 in gold, greenbacks and jewels.

The soldiers also demanded the wallets and cash from the family before leaving Sweetwater around 3 a.m.

There is no evidence that Sherman knew of the Sweetwater raid.[4]