Superfunction comes from iteration of another function. Roughly, for some function

and for some constant

, the superfunction could be defined with expression

can be interpreted as superfunction of function

. Such definition is valid only for positive integer

. The most research and applications around the superfunctions are related with various extensions of superfunction; and analysis of the existence, uniqueness and ways of the evaluation. For simple function

, such as addition of a constant or multiplication by a constant, the superfunction can be expressed in terms of elementary function. In particular, the Ackernann functions and tetration can be interpreted in terms of super-functions.

logos of the Phys.Dept. of the MSU and that of Math.Dep.

in the complex plane

was used as logo of the Physics department of the Moscow State University [1][2][3]. (Mathematicians of the same University were not so arrogant and used the symbol of integral and the Moebius surface at their logo, see the figure at left).

That time, researchers did not have computational facilities for evaluation of such functions, but the

was more lucky than the

; at least the existence of holomorphic function

has been demonstrated in 1950 by Helmuth Kneser [4]. Actually, for his proof, Kneser had constructed the superfunction of exp and the corresponding Abel function

is an entire super-exponential, although it is not real at the real axis; it cannot be interpreted as tetrational, because the condition

cannot be realized for the entire super-exponential. The real

can be constructed with the tetrational (which is also a superexponential), and the real

can be constructed with the superfactorial. The plots of

in the complex plane are shown in the right hand side figure.

The recurrent formula of the preamble can be written as equations

Instead of the last equation, one could write

and extend the range of definition of superfunction

to the non-negative integers. Then, one may postulate

. The following extension, for example,

is not trivial, because the inverse function may happen to be not defined for some values of

. In particular, tetration can be interpreted as super-function of exponential for some real base

For extension to non-integer values of the argument, superfunction should be defined in different way.

belongs to some connected domain

In general, the super-function is not unique. For a given base function

could be constructed as

is any 1-periodic function, holomorphic at least in some vicinity of the real axis, such that

If the range of holomorphism required is large enough, then, the super-function is expected to be unique, at least in some specific base functions

, is called tetration and is believed to be unique at least for

, see [6]; but up to year 2009, the uniqueness is rather conjecture than a theorem with the formal mathematical proof.

The short table of superfunctions is suggested in [7]. A little bit more extended table is available at TORI [8]. Some superfunctions can be expressed with elementary functions, they are used without to mention that they are superfunctions. For example, for the transfer function "++", which means unity increment, the superfunction is just addition of a constant.

is superfunction (from 1 to

In this case, the superfunction

is periodic; its period

and the superfunction approaches unity also in the negative direction of the real axis,

The example above and the two examples below are suggested at [9].

is parameter; the corresponding superfunction

. Within wide range of values of parameter

is holomorphic function of

, it can be expressed in a way, equivalent to the representation above [7] .

In general, the transfer function

has no need to be entire function. Here is the example with meromorphic function

is the set of complex numbers except singularities of function

. For the proof, the trigonometric formula

can be used at

In the similar way one can consider the transfer function

Inverse of superfunction can be interpreted as the Abel function.

with respect to superfunction

; although, from properties of holomorphic functions, there should exist some subset

. In this subset, the Abel function satisfies the Abel equation.

The Abel equation is some equivalent of the recurrent equation

in the definition of the superfunction. However, it may hold for

from the reduced domain

Applications of superfunctions and the Abel functions

Superfunctions, usially the superexponentials, are proposed as a fast-growing function for an upgrade of the floating point representation of numbers in computers. Such an upgrade would greatly extend the range of huge numbers which are still distinguishable from infinity.

Other applications refer to the calculation of fractional iterates (or fractional power) of a function. Any holomorphic function can be declared as a "transfer function", then its superfunctions and corresponding Abel functions can be considered.

Transition from a function to its inverse function 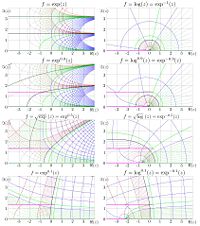 in the complex plane for various

allows to calculate the fractional iteration

of some transfer function

and the Abel function

are established, the fractional iteration can be defined as

, the holomorphic transition from function

is relalised. The figure at left shows an example of transition from

versus real argument is plotted for

of the exponential. The figure at right shows these functions in the complex plane. At non-negative integer number of iteration, the iterated exponential is entire function; at non-integer values, it has two branch points, thich correspond to the fixed points

of natural logarithm. At

remains holomorphic at least in the strip

along the real axis.

Similar example is suggested for a nonlinear optical fiber [6].

It may have sense to characterize the nonlinearities in the attenuation of shock waves in a homogeneous tube. This could find an application in some advanced muffler, using nonlinear acoustic effects to withdraw the energy of the sound waves without to disturb the flux of the gas. Again, the analysis of the nonlinear response, id est, the Transfer Function, may be boosted with the superfunction.

In analysis of condensation, the growth (or vaporization) of a small drop of liquid can be considered, as it diffuses down through a tube with some uniform concentration of vapor. In the first approximation, at fixed concentration of the vapor, the mass of the drop at the output end can be interpreted as the Transfer Function of the input mass. The square root of this Transfer Function will characterize the tube of half length.

, and wants to realize it as a sequential connection of a couple of identical operational elements, then, each of these two elements should have transfer function

. Such a function can be evaluated through the superfunction and the Abel function of the transfer function

The operational element may have any origin: it can be realized as an electronic microchip, or a mechanical couple of curvilinear grains), or some asymmetric U-tube filled with different liquids, and so on.