'Stairway to Heaven' is a song written and recorded by Led Zeppelin, which first appeared on Led Zeppelin's 1971 untitled fourth album, often referred to as Led Zeppelin IV. One of their best-known songs, it has become the band's signature tune. The Rock and Roll Hall of Fame lists this song as one of the greatest rock and roll songs of all time. 'Stairway to Heaven' remains the biggest-selling sheet music in the history of rock with more than 1.2 million copies sold (An average popular tune sells 10,000 to 15,000 copies). It is also regarded and often quoted as being one of the most requested songs on US radio, despite never being officially released as a single.[1][2][3] Guitarist Jimmy Page was voted the top guitar soloist of all time for this song,[4] and it regularly tops most popular song lists.

Led Zeppelin began working on 'Stairway to Heaven' during the rehearsal sessions for Led Zeppelin III at Bron-Yr-Aur, and finally recorded the main track in December 1970, for inclusion on Led Zeppelin IV.[5] The construct of the song came about from different ideas Page had captured on a New Vista tape recorder, in the lead up to that Welsh cottage.[6] The song's opening guitar line is similar to a progression used by Page for a session with Scottish band Cartoone in October 1968, on the song 'Ice Cream Dreams' (Cartoone, 1969), while the main riff evolved from a previous track called 'Tangerine' which was recorded for Led Zeppelin III, but utilised a progression Page had toyed with during his earlier mid-1960s Yardbirds stint. Melody Maker journalist Chris Welch referred to 'Tangerine' as an 'embryonic Stairway to Heaven'.[7] Robert Plant later added lyrics during sessions at Headley Grange, Hampshire, in early 1971 and the Page guitar solo was recorded at Island Studios' Sarm West Studio. It was finally mixed and mastered at Island Studios in London with engineer Andy Johns.[8]

This song with its mix of delicate Celtic-inspired acoustic music and the swaggering bluster of electric blues, has, perhaps, more than any other single song, defined the development of both the 'power ballad' and the raw bombastic mainstream heavy metal song- musical references to 'Stairway' are in evidence all over the popular culture map. Page's classic guitar solo on was played on a 1958 Fender Telecaster plugged into a Supro amp. Page recorded three different improvised solos for 'Stairway to Heaven', and finally chose one version of the solo on the current recording, as he felt it best fit the mood of the song. The other guitar parts on 'Stairway to Heaven' were played using a Fender Electric XII (12-string) and a Martin acoustic. These can be heard on the right and left recording channels respectively. John Paul Jones used two bass recorders for the intro and a Hohner Electra-Piano electric piano for the middle section.

The song begins in folk ballad form with gentle finger-picked arpeggiated acoustic guitar and harmonised bass recorders filling the background behind Plant's mystical lyrics. Like Ravel's 'Bolero', the song is structured to rise slowly in dramatic tension with subtle increases in instrumentation and volume, with the addition of drums, bass, electric piano and Page's ringing electric 12-string guitar.

Composed in the key of A minor, the opening four bar chord progression in the verse proceeds Am-Am9-G#-C-G-D-F#-Fmaj7-G Am and back to Am, while the bassline plays a chromatic descending progression of A-G#-G-F#-F. The Telecaster guitar joining the progression at the end of the second verse on the words 'Oh, and it makes me wonder'. The long-delayed drums follow at the end of the fourth verse as 'the forests… echo with laughter'. Finally, a shimmering open D chord breaks through the melody, ushering in the guitar solo response to the discovery that the 'stairway lies on the whispering wind'. It finds Page executing a succession of blues runs and melodic phrases, with metal slide overdubs, in a performance rarely matched for sheer emotion, melody and raw energy. A final melee of power chords and unison string bends quickly ensues, leading to Plant's graceful vocal finale. The final progression is a i-VII-VI (natural minor) progression in Am-G-F.

The lyrics, composed by vocalist Robert Plant were spontaneously improvised next to an evening log fire at Headley Grange. Plant was an avid reader and was acquainted with the works of the British antiquarian Lewis Spence, and later cited Spence's Magic Arts in Celtic Britain as one of the inspirations for the lyrics to the song.[10] The meaning behind the lyrics is shrouded in mysticism and ambiguity, perfectly complimenting the theme of 'light and shade' within Led Zeppelin IV.[11] Page has said that the song has whatever meaning the listener wants to put to it. The most popular meaning behind the lyrics is that of spiritual liberation.[12] The 'stairway' to heaven is the liberation of the soul, as it makes the long journey from Earth (the physical world) to the higher spiritual planes. As Plant said (on the 27 July 1973, Madison Square Gardens recording, and on other occasions) when introducing 'Stairway to Heaven', '… this is a song of hope'. This hope reflecting some of the ideals of the Hippie movement, which Plant was closely associated with, that the values of human society will turn away from desires for greed and wealth and power towards universal love and kindness and the evolution of the soul. It's not coincidental that two of the following tracks on Led Zeppelin IV — 'Misty Mountain Hop' and 'Going to California' — evoke memories of the Summer of Love.

The associative powers of the lyrics can be broken up into categories. We are presented with a number of mysterious figures: a lady, the piper, the May queen. Images of nature abound: a brook, a songbird, rings of smoke through the trees, a hedgerow, wind. We find a set of concepts (that pretty much sum up the central concerns of all philosophy): signs, words, meanings, thoughts, feelings, spirit, reason, wonder, soul, and the idea that 'all are one and one is all.' We find a set of vaguely but powerfully evocative symbols: gold, the West, the tune, white light, shadows, paths, a road, and the stairway to heaven itself. At the very end, we find some paradoxical self-referentiality: 'To be a rock and not to roll.'

The words provide a very open text; like those of Don McLean's 'American Pie' (also released in 1971), they invite endless interpretation. Yet they are resonant, requiring no rigorous study in order to become meaningful. Like the music, they engage with the fantasies and anxieties of our time. They offer contact with social and metaphysical depth in a world of commodities and mass communication. 'Stairway to Heaven,' no less than canonized artistic postmodernism, addresses 'decentred subjects' who are striving to find credible experiences of depth and community. It strains at mystery and promises utopia: 'A new day will dawn,' and 'If you listen very hard/The tune will come to you at last.' Another notable line includes 'If there's a bustle in your hedgerow..' A bustle in your hedgerow refers to the beginning of spring. When the flora and animals, etc., wake up and are new and refreshed after the winter, which ties in with the idea of a utopia.

'Stairway to Heaven' was the only song whose lyrics were printed on an album's inner sleeve by Led Zeppelin. 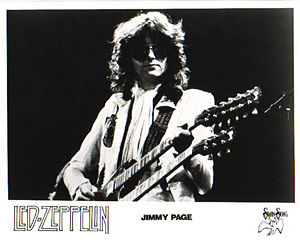 © Photo: ledzeppelin.com
Jimmy Page performing guitar solo on a Gibson EDS-1275 in 'Stairway to Heaven', at The Forum, Inglewood, California on 23 June 1977.

For live performance of 'Stairway to Heaven', Page used a double-necked 6/12 1968 Gibson EDS-1275. Jones used a Mellotron M400 in place of the three recorders in the early performances before switching to a Yamaha CP70B Grand Piano and Yamaha GX1 to synthesize this arrangement in later years.[13] When performed, Led Zeppelin would often extend the song to over ten minutes in length, with Page playing an improvised guitar solo and Plant inserting a number of lyrical ad-libs, such as 'Does anybody remember laughter?', 'Wait a minute!' and 'I hope so'. During live performances, visual effects were added during Page's solo, including rotating mirror balls and displaying split-screens on the background projection.

The debut public performance of the song took place at Belfast's Ulster Hall on March 5, 1971.[14]. The song was played at almost every concert since 1971. In their later concert tours, the band chose to perform the song as their final pre-encore number. Led Zeppelin's longest ever performance of this song was their last gig in Berlin in 1980. It clocked in around 15 minutes long. Page played this song as an instrumental on his solo tours. The song was performed again by the surviving members of Led Zeppelin at the Live Aid concert in 1985,[15] and at the Atlantic Records 40th anniversary party in 1988, with Jason Bonham on drums.[16] In November 1994 on Japanese television Page and Plant played a shortened live version of 'Stairway to Heaven' before a surprised crowd and talk show hosts. As a teaser, the first few bars were strummed alone during the Page and Plant tours, during the final notes of 'Babe I'm Gonna Leave You'. It was once again performed in full during the Ahmet Ertegun Tribute Concert in the O2 Arena in 2007.

As with 'Whole Lotta Love', Led Zeppelin's record label Atlantic Records, were interested in issuing this track as a single, but the band's manager Peter Grant refused repeated requests to do so since the release of Led Zeppelin IV. Grant's logic was that Led Zeppelin IV was becoming a big seller and that releasing an 8 minute single would only detract from album sales.[17] Atlantic Records did release a limited run of seven inch promotional singles to radio stations, which are now highly collectable items.[18] It did, eventually however, appear on a limited-edition Australian acoustic EP, and in the 1990s as a 20th anniversary promo book. In November 2007, through download sales promoting the Mothership compilation album, the song reached #37 on the UK Singles Chart,[19] and #13 on the New Zealand Singles Chart.[20]

'Stairway to Heaven' is still played 4,203 times a year by the sixty-seven largest AOR (album-oriented rock) radio stations in the US, according to trade magazine Monday Morning Replay. US communications company MediaBase lists 'Stairway to Heaven' as having been played a total of 1,432,403 times as of May 2008.[21] While the song is often requested, the song itself is not played as many times such as 'Black Dog' or 'Rock and Roll' due to it's length (8 minutes 3 seconds) restricting airplay. French Charly 1300 TMP chart rated it as Number 1[22]