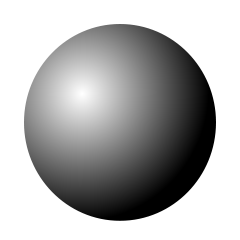 A ball is spherical in shape.

A sphere is a three-dimensional surface, consisting of all points that are a given distance away from a single point, known as the center of the sphere. The distance from the center to the surface is the radius of the sphere.

Spheres in the physical world

In reality, physical objects can be only approximately spherical. Examples are planets and stars, which, owing to their rotation, actually bulge out at their equator. Balls used for sports can have stitched seams (baseballs), dimples (golf balls), a hole for inflating with air (volleyballs), or other visible irregularities. Even an object that is machined to be a smooth sphere to high precision cannot be a true sphere, as the object's constituent atoms will make the surface irregular at an atomic scale.

"Sphere" can also refer to a region of space, which may or may not be associated with a physical object. For example, the Hill sphere of a planet refers to the region of space within which satellites can be in orbit about the planet, and outside of which would-be satellites instead orbit the planet's star. The Moon, at a distance of 384,000 km from Earth, is well within Earth's Hill sphere, which has a radius of about 1,500,000 km, and thus orbits Earth. If the Moon were farther away than 1,500,000 km, it would be more strongly influenced by the Sun's gravitational pull than Earth's, and orbit the Sun instead.