The Siberian tiger (Panthera tigris altaica) is the largest non-extinct subspecies of tigers. It once inhabited large parts of Western and Central Asia and eastern Russia, but is currently found only in some regions of far eastern Siberia, where it is protected. The western population (extinct in the first half of the 20th century) was referred to as the Caspian tiger, although it is currently not considered a separate subspecies. 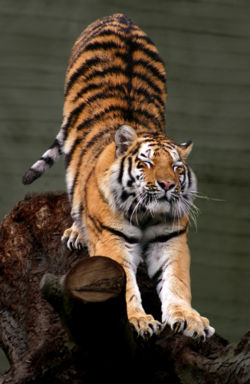 Most animals have an orange coat with dark brown or black stripes accented with white. The fur of the Siberian tiger is thicker than that of other species. In particular the winter coat is significantly thicker and longer, and is 40 to 50 mm long on the back, 70 to 100 mm on the neck and around 60 to 100 mm on the chest and abdomen. Thick fur enables Siberian tigers to survive harsh winters with temperatures as low as -45°C. The winter coat is paler, and has more expressive colors, but the stripes appear less clearly outlined due to the longer fur.

The tail is about half as long as the body and serves for balance when running through fast turns. They also use their tails in communication.

The forepaws have retractable claws on all toes while the dew claw is absent in the hindpaws. The claws are 80 to 100 mm in length. Glands between the toes produce secretions which are left when tigers scratch. These send signals to other tigers in the area.

Their lifespan is up to 15 years in the wild, reaching 25 years in captivity.

The Siberian tiger occupies a very large territory, up to one thousand square kilometers. It needs adequate cover to be able to ambush or stalk its prey, and is therefore usually found in forested areas. It may occupy the same territory for years if food sources are stable. When sources are scarce, it migrates for hundreds of kilometers. Both males and females mark their territory with urine and by scratching trees. The male tiger defends his territory against other males, especially the important parts such as a boundary close to a female's territory or an area rich in food. The males are solitary and avoid other males. They allow other tigers to pass through their territory, being more tolerant of females.

The female is often accompanied by her cubs. Cubs start to hunt when they are less than two years old, but leave their mother at 3 to 5 years. The female cubs stay with their mother longer and establish territories close to the original territory. Males leave earlier and travel farther, which makes them more vulnerable in in the early stage of independence. Although newborns are equally divided between male and female, there are usually 2 to 4 times more females than males among the adult population.

Tigers hunt by ambush, mainly at night, enabled by their excellent night vision and highly developed senses of hearing and smell. They can reach a speed of up to 80km/h for a short time and can jump as far as 7 meters. In spite of that, the tiger must get within 10 to 25m of its prey before launching an attack, and only one in 10 or 20 attempts is successful.

To make a kill, the tiger leaps on its prey and grabs it by the nape of the neck with its back feet planted firmly on the ground. Larger pray is brought to the ground and killed by a suffocating bite to the throat. If the tiger misses its prey on the pounce, it may chase if for up to 200m but rarely catches it.

It takes the dead animal to some hidden spot. If it is a large animal, the tiger feeds on it for several days, covering it after eating its fill. During this time, the tiger does not kill again. An adult tiger needs about 10kg of meat a day to survive in the cold climate, and is capable of eating up to 50kg in one meal.

Siberian tigers are rarely man-eaters. Only six incidents of man-eating have been recorded in the whole of the 20th century. In 2007 a Siberian tiger, "Tatiana", was gunned down after its escape from a San Francisco zoo. The tiger had killed one person and injured two others.

Tigers mate at any time during the year. A female shows that she is ready to mate by leaving urine deposits and scratch marks on trees. She may go in search of a male. She is receptive for only three to seven days. During this time a pair will mate many times, after which the male leaves to mate with another female.

After a gestation period of three to three and a half months, three or four (up to six) blind cubs are born in a sheltered den. They are nursed by their mother, who rarely leaves them, while the father hunts for food. At about two weeks old their eyes open and their first teeth begin to grow. At three months the cubs start to leave the den, and the mother brings them meat to eat. They continue to take her milk until they are five or six months old. At this stage they begin to accompany her on hunting trips, but depend on their mother for food and protection for another 2 years. Cubs learn how to kill at 16 months. The white ear spots help the mother and cubs to keep track of each other in forests at night. Young males entering a female's territory may kill her cubs.

The Siberian tiger's IUCN status is considered critical. In the 1940s Siberian tigers were brought to near extinction, with only about 40 animals remaining in the wild. The population has recovered after protection from hunting and increased to 150 to 200 in the mid nineties. The number continued to increase until 2005 when there were about 500 individuals in the wild, but has since faced a dramatic decline, which is attributed to rising poaching and continued habitat loss. The Russian population currently counts only 300-400 individuals. There is also a small number of animals in north China, probably fewer than 50. Logging is threatening the tigers by fragmenting their habitat and isolating them from each other. In addition, the continuous creation of new logging roads provide poachers with access to formerly remote areas. Hunting is largely motivated by the demands of the Chinese black market, where different tiger parts are valued in traditional medicine. The problem increased after the fall of the Soviet Union in 1987 due to the breakdown of the economy and more porous borders enabling smuggling.

Until the 19th century, Siberian tigers inhabited wide areas of Western and Central Asia. These populations were known as Caspian tigers, although it is now considered, based on genetic research of their remains, that the Caspian tiger does not form a separate subspecies. The western populations became extinct in the 20th century due to hunting and deforestization.

In 1992 the Siberian Tiger Project was launched, devoted to saving the tiger by launching anti-poaching patrols, habitat improvement studies, and tiger tracking projects.

There is a scientifically managed captivity program for Siberian tigers, aiming to preserve genetic diversity. There are about 550 live animals in zoos today, descended from 109 founders caught in the wild (mostly in the 1950s and 1960s). These animals are registered in the International Tiger Studbook.