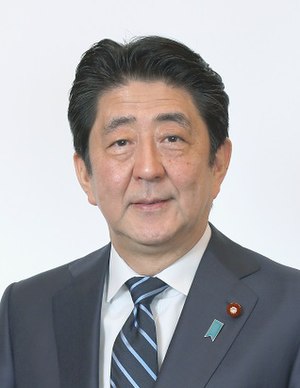 Shinzo Abe (安倍晋三 Abe Shinzoo; 21st September 1954 – 8th July 2022) was the Prime Minister of Japan and leader of the Liberal Democratic Party from 2012 to 2020 and 2006 to 2007.[1] His first premiership ended when various factors including low approval ratings, the failure to pass an anti-terrorism law and ill health led him to quit.[2] However, he went on to become the longest-serving Japanese prime minister in history.

Abe was assassinated in July of 2022 while campaigning for his party in Nara.[3] The assassin apparently targeted Abe in part because of perceived ties, of both Abe and his party, to the Unification Church, a.k.a. the Moonies.

The state funeral held for Abe on September of 2022 generated controversy both for its cost and for it militaristic overtones, in a country which has adhered to a philosophy of pacifism for all the decades since World War II[4].